I have gone on record on a number of occasions saying that I feel the general standard of refereeing is poor in Thailand, and I stand by that view.

However, officials have a difficult job and they are not helped by the attitude and behaviour of coaching staff and players. Buriram have faced Bangkok United twice in four days and their head coach Alexandre Polking and his assistants have made themselves look nothing short of ridiculous. 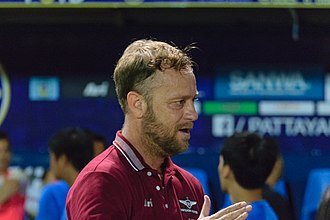 Of course, every coach wants his team to win and it’s good to show a bit of passion. But, Polking and his fellow bully boys have taken things to a higher, or lower, depending upon how you look at it, level.

Their constant whining and whinging to the fourth official in both games was unacceptable. What was the point? The fourth official has no influence on events on the pitch and even if he had, he should not have to endure constant abuse.

They even complained about decisions that were obviously correct and they should look at themselves very closely and realize what fools they have made of themselves.

Sadly, this kind of attitude and behaviour spreads to the players, thus making it even harder for officials. The Bangkok United players were a mirror of their boss and spoiled  what should have been two absorbing games between the best teams in Thailand.

Thailand is an emerging footballing nation but their progress would speed up if Thai players learned respect and self-discipline on the pitch. This has to start with the coach.

If the players believe the officials are against them, how can they focus purely on football? The FA should take action against Bangkok United and ban Polking from the touchline until he grows up and starts acting like a man.

Referees need to punish players who  cross the line of acceptable behaviour, a few red cards would soon sort things out. Anders Tunez went through a spell where his attitude towards officials was over the top and it was affecting his game.

Coaches of all teams need to start making sure that their players, particularly Thais, stop giving away numerous needless free-kicks . This allows games to flow and benefits players and spectators alike.

However, it has to come from the top and Mr Polking and his assistants would do well to start setting a good example.