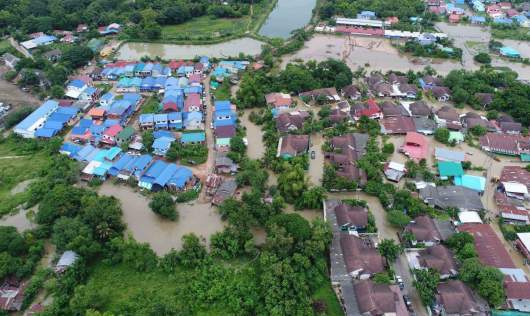 Most parts of Sakon Nakhon city and roads were submerged while Sakhon Nakhon Airport announced it would temporarily close until this afternoon or until the flood situation improved. Some parts of the city also had electricity blackouts. Sakon Nakhon Hospital had to move patients to upper floors away from the flood.

Nearly 70 tourists were trapped at a hotel surrounded by floodwater in Muang district on Friday afternoon, said Facebook user “Ich Bin Som”. The Facebook user also posted pictures of the situation at the 75-room Hop Inn Hotel to the public group “Sakonnakhoncity Photo” to call for assistance.

Several other hotels and apartments and even a shopping mall also reported marooned people in need of aid. 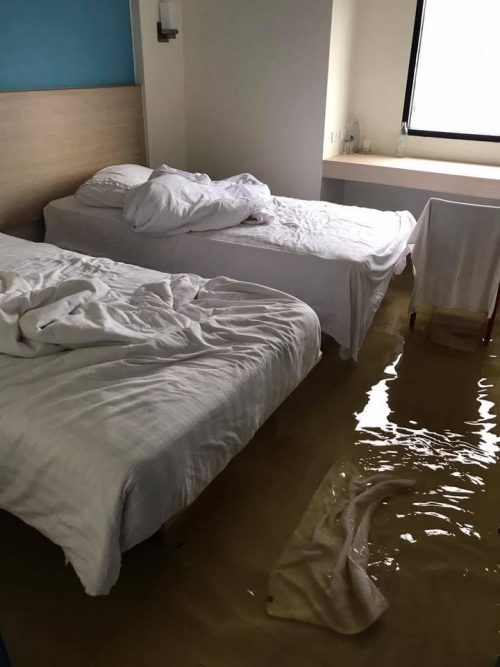 The command centre at the provincial governor’s residence would monitor the situation and dispatch staff and tools to aid affected residents, he added.

In Khon Kaen’s Muang district, floodwater as deep as one-metre hit the city area on Thursday afternoon, especially Maliwan Road, where 30 cars were damaged. Road islands were demolished by the authority to help drain floods faster. 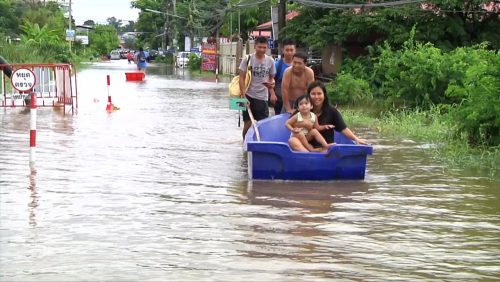 Days of heavy rains and northern runoffs have led to the Yom River bursting the flood barrier dam in Sukhothai’s Muang district, sending 80cm-deep floods to the Muang Sukhothai Municipality’s fresh market yesterday morning. The flood barrier had leaked the night before, resulting in slight flooding, but officials sealed the hole with large sandbags and continued to monitor the situation.

At 5am, the river bust the flood barrier again, 30 metres from the previous night’s leak. This time the floodwaters flowed along the Ratchathani Road and vendors at the market’s 50 shops had to close their businesses temporarily in the wake of 40cm- to 80cm-deep torrents.

As officials attempted to seal the new leak behind Wat Chai Chumpol in the afternoon, another 100-metre-long section of the barrier broke and floods covered the municipality’s economic area, including Rat-uthit, Thassanapanich roads. Wichien Jamnong and Khlong Taphetch communities were also submerged.

Yom River in front of the provincial governor’s residence was at 7.37 metres and flowed at 549 cubic metres per second between 8am and 2pm.

In Maha Sarakham, the widespread flooding has prompted the Highway Department to temporarily close two bridges on Highway 208; the bridges at kilometre markers 12+400 and 17+137 were under 50 centimetres of water and showing signs of erosion. Motorists are advised to instead use other routes.

He said the fund committee would have a meeting on August 4 to consider criteria to compensate and assist flood-affected residents nationwide.

He said each province had a Bt20 million budget reserved for disaster mitigation from the Interior Ministry, so they would consider providing aid as soon as possible.