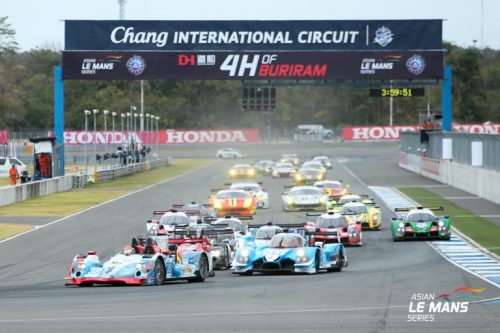 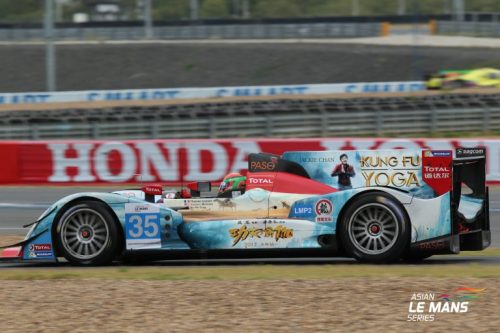 26 cars took to the grid for the penultimate race of the 2016-2017 Asian Le Mans Series, held in Buriram, Thailand. After a visit from His Excellency Patrick Simiyu Wamoto, Ambassador Extraordinary and Plenipotentiary from Kenya, along with Mr.James Nyongesa, his First Secretary on the Sunday morning, the teams got ready for the main event of the weekend, the 4 Hours of Buriram.

The race got off to a clean start and saw Ho-Pin Tung (China) in the #35 Jackie Chan DC Racing Oreca 03R Nissan create a gap from the beginning. This was lost when the safety car had to come out to retrieve the stranded CN car, but then was quickly regained.

Despite a drive through penalty for overtaking under yellows, the #35 Jackie Chan DC Racing Oreca 03R Nissan, shared with Thomas Laurent (France) and Gustavo Menezes (USA), managed to hold onto their lead and finished with a gap of over a minute and 20 seconds ahead of the other LMP2 cars.

During the race, it looked hard for any of the others to catch up, which isn’t to say that they didn’t try. Algarve Pro Racing completed the podium steps, with the crew of the #25 Ligier JSP2 Nissan finishing second, with Matt McMurry (USA), Andrea Roda (Italy) and Andrea Pizzitola (France). Tacksung Kim (Korea), Michael Munemann (Great Britain) and Mark Patterson (USA) were third with the #24 Ligier JSP2 Judd, which is a great result for a fully bronze line-up.

The #8 Race Performance Oreca 03R Judd came 4th, after suffering from a few technical issues towards the end of the race. This means that the provisional standings see Jackie Chan DC Racing in the lead, but the gaps are close enough that we could see an Algarve Pro Racing crew win the LMP2 title in Sepang in a few weeks time.