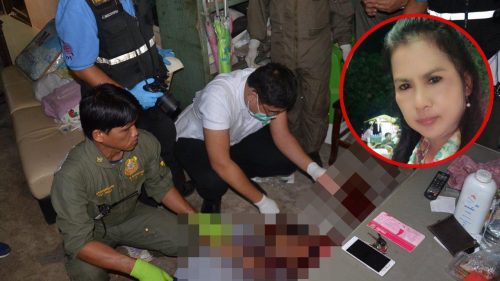 A jealous Thai husband shot his ex-wife because she wouldn’t reveal what was on her phone.
As the woman cowered under a counter in a convenience store begging for her life he aimed at the back of her head from point blank range and fired.
Sankhaburi, Chainat police arrived at the scene after the assailant had fled. They found Janthima Ritsiri, 53, dead under the counter. She was still clutching her phone.
Friends of the victim said that the shooter was her ex husband Jakkrit Rakjap, 51, known as Tee. He arrived at the store on a motorcycle and entered wearing a helmet.

He demanded to know what was on the victim’s phone but she refused to show him. An argument broke out and he warned the friends not to intervene.

Tee pulled out a gun and the victim tried to hide under a counter as she begged for him not to shoot. But he went up to her and shot her in the back of the head showing no mercy.

An 11 mm shell casing was found two metres from the body. He then fled the scene.

Police said that they understand the couple – both farmers – had split up a year ago but the husband still loved her. They believed that the husband thought there was evidence of her involvement with another man on her phone.

The victim and her friends had been out on a shopping trip and had dropped in at a friend’s convenience store on the way back home when the assailant arrived.

Police are visiting his likely whereabouts and have applied to the court for an arrest warrant.
(Source:-ThaiRath)