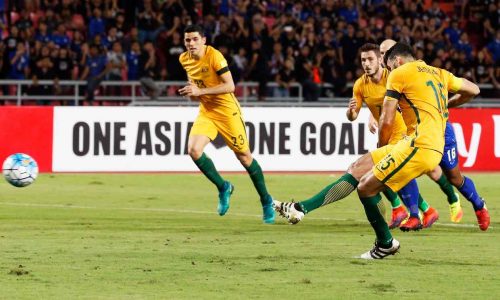 In a thoroughly entertaining game of football, Thailand were forced to settle for a 2-2 draw following a dreadful refereeing decision , along with a blatant piece of gamesmanship by Australia’s Jedinak.

It was hard on the War Elephants who probably produced their best performance in their history against a side 107 places above them in the world rankings.

This was a remarkable effort by Thailand and although World Cup qualifying is impossible, it does give them something to build on as they strive to improve their standing in world football.

Australia were expected to brush the pointless Thais aside and it was all going to plan when Jedinak buried an early penalty following an unfortunate handball.

The visitors poured forward and the Thai defence was again looking vulnerable. However, they weathered the storm and little by little, Thailand edged back into the game.

The defence became more compact, the tackling became sharper and the passing quick and accurate. They got a deserved equalizer mid-way through the half, following a flowing, incisive mood which Teerasil finished calmly at the far-post.

Thailand pushed forward and little was being seen now of the visitors who were happy to hear the half-time whistle. The game was being played at a fast pace which was proving exciting for spectators. 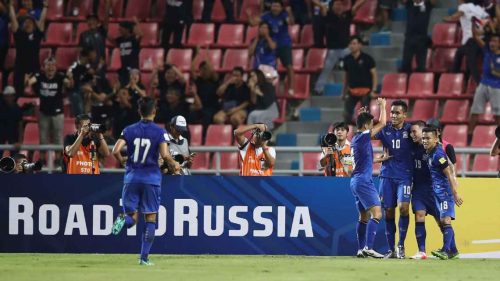 Unbelievably, Thailand were even better in the second period. They pressed Australia high up the pitch and they were enjoying a lot of possession, which they used to good effect.

The pressure finally told when Thailand won a clear penalty following a desperate, lunging tackle in the box. Teerasil easily beat the keeper to send the home crowd into raptures.

Thailand continued to push the visitors back with some superb passing which was opening up the Australian defence on a regular basis. However, disaster struck in the sixty-fifth minute when Jedinak went down in the box, following a corner.

To total disbelief by most people watching, the referee pointed to the spot. Jedinak was already on his way down before any contact was made with the Thai defender.

It was a blatant dive which should have resulted in a yellow card for the desperate Australian who proceeded to score with the spot-kick.

To their eternal credit, Thailand simply rolled up their sleeves and continued to pummel the visitors’ defence. Only bad luck and some excellent goalkeeping prevented Thailand from grabbing the winner they so richly deserved.

Before the game, the Thai camp said that they were going to play for the King. They certainly did and His Majesty would have been immensely proud of them.