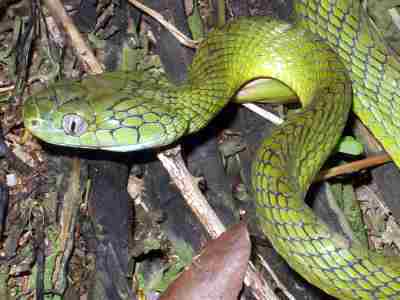 Those of you who follow the Thai news may remember the flurry of stories
about snakes that were told online throughout June last year. In fact
as the rainy season started to bite so did the snakes!

Chief of the worrying tales was the story of the man who spent several
days in hospital after he had his genitals bitten while doing his
daily business on a toilet in his house.

Following that cautionary tale it seemed that the Thai media were
falling over themselves to print every story of a snake in a bathroom
or hiding in a house. June in particular was an extremely busy month
for the various foundations up and down the country that can be called
to deal with problems with serpents of all descriptions.

Found in roofs and engine compartments they are often not dangerous
just scary. In fact some of the most dangerous ones are the smallest.

Hundreds of people are bitten each year in Thailand and it is just as
well to take precautions especially if you are doing activities that
could surprise the creatures which is when most problems arise.

Most bites from snakes occur in the month of June. They published figures from the Department of Public Health that revealed some 2,000 people have been recorded as
bitten by snakes over the last three years.

There were 1,219 cases in 2014, 457 in 2015 and 234 last year. No
explanation was given for the fall in the numbers though it must be
stressed that these are only recorded cases and the actual figures are
likely to be much higher.

In June there were 152, 52 and 31 recorded bites in the last three
years respectively.

A “guru” of snake bites is vet Thaksa Wesarachaphong who explained why
June was a time to take especial care regarding snakes both in Bangkok
and up-country. He also spoke of the species that are most responsible
for bites in the capital and elsewhere.

“In June many snakes hatch,” said Thaksa. “This means their numbers
increase enormously and so do the prevalence of snake bites.

“These new hatchlings are just like any kids – they have no
experience. They find it hard to find and seek hiding places so are
often in exposed areas where people may be. They also have problems
fighting their elders and fitting in to snake society.

“The immaturity of juvenile snakes leads to many of the increases in
bites experienced by people when the rainy season come along”.

Thaksa said that the biggest offender in Bangkok was the snake known
locally as “Ngu Khiaw Hang Mai” that is known as a viper in English.
These snakes like to hang out in trees and shrubs.

Thaksa said that if people find it necessary to be rummaging around in
trees and shrubs then they should make their presence felt beforehand
so that the snakes can slither off.

He said that most snake bites occur due to humans and snakes
confronting each other by surprise.

Outside of Bangkok the most common bites are committed by the Pit
Viper a bright green snake known locally by the name “Ngu Kapa”. These
are rarely found in Bangkok.

They tend to prefer the habitat of old, dry leaves and are ground
dwellers in general. If walking in such areas it is advisable to wear
boots with high sides.

Thaksa said that the pit viper is particularly prevalent in Chonburi
and the south of Thailand where a favourite place for them is rubber
plantations.

Both varieties of snakes are quite small but they pack a punch and can
cause a lot of damage.

The snake expert recommended that if people are bitten on the hand
then the wound should be wrapped tightly well up around the arm. A
sling should also be made. If the bite is on the foot then tight
bandaging only should be done well up the leg.

When such first aid measures are not available then flooding the
wounds with copious amounts of water can help.

In all cases of snake bites victims should get to hospital as soon as
possible, hopefully armed with the knowledge of which kind of creature
caused the bite, said Thaksa.

So beware of snakes in Thailand and never joke about them or mention
their name when out walking –  many Thais are superstitious that this
only encourages the beasts!