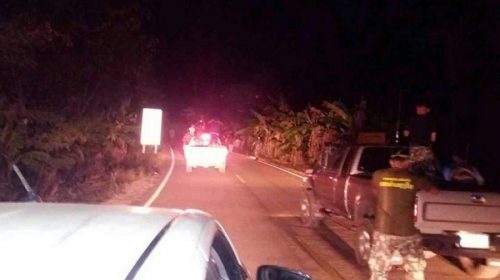 Dozens of local officials in five provinces are hunting a wandering wild male elephant that has killed four people, in order to chase it back into the forest.

People in Chachoengsao, Chon Buri, Rayong, Chanthaburi and Sa Kaew provinces have warned about the elephant but said he should be easy to spot because he has no tusk.

The elephant is thought to have strayed from the Ang Rue Nai wildlife sanctuary and intruded on people’s farms, damaging and eating crops and bananas in many areas from Soidao district, Chanthaburi, to Wangsomboon district, Sa Kaew.

People have therefore been warned to be cautious when they tap their rubber trees at night-time and even when they are in and around their homes.

Manote Rattanatrai, an elephant look-out team chief at Khao Soidao wildlife sanctuary, said officials were quite confident the elephant was responsible for the series of intrusions into people’s farms.

Therefore, a team of 50 officials from several wildlife sanctuaries had been assigned by the Sa Kaew governor to look for him and chase him back deep into the forests.

The officials come from several wildlife sanctuaries, including Khao Soidao, Ang Rue Nai and Wang Somboon. Soldiers in those areas are also helping in the search.

Pitak Burana, village headman at Ban Klong Kai Tuen in Klong Hat, said he had already warned his villagers to be alert for the animal and that it may be entering the areas.

Lieutenant Sompote Charanya-orn, ranger commander said that it was reported that the elephant had been spotted at a temple in Klong Hat district and was heading to Ban Khaopapueng village.

Therefore the hunt for the animal would be focused on those areas, he said.

As a keen conservationist and animal lover, normally I would support the actions being taken. However, occasions do arise where an animal needs to be destroyed and sadly this may be one of those occasions. When an elephant turns rogue you can’t afford to take chances.