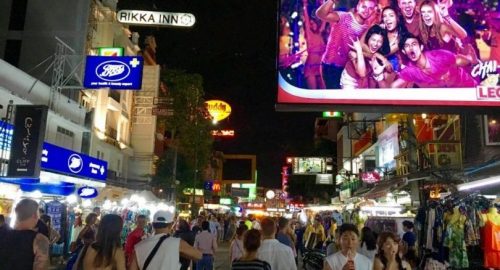 The end of Khaosan? Photo courtesy of Nutcha Aree

Tourists will desert the area, or even Bangkok, if daytime stalls are not restored, say visitors and street vendors.

Khaosan Road – the backpackers’ mecca – has it all, from cheap T-shirts to elephant-print baggy pants, from tattoos to henna painting, from budget guesthouses to massage parlours and even tour packages to southern islands.

The world-famous Bangkok destination attracts hordes of international youth with offers of street food, beer and a chaotic, lively nightlife. Just about everything and anything is available at all times of the day.

However, the municipal authority wants to bring order to the late-night carnivalesque atmosphere.

Since August 1, the Bangkok Metropolitan Administration (BMA) has strictly enforced the rarely-used Public Cleanliness and Orderliness Act 1992, which forbids daytime street vending. Under the recent sweep, the street stalls have been banned from doing business in front of guesthouses, cars, cafes and shops during the day.

The plan, however, isn’t popular with tourists and shoppers. The authorities are now working to solve this roblem with a public hearing to allow street vendors and store owners to air their views.

From around 9pm to 3am, backpackers use Khaosan as “party central”, rather than a shopping fair, vendors told The Nation on a recent night-time visit. Electronic dance beats can be heard blaring from clubs and bars.

Along both sides of the road, carts and stalls are lined up, offering late eaters pad Thai and mango sticky rice. Several smiling hawkers offer “laughing gas” or a crispy fried scorpion. Local and foreign partygoers flock the street daily.

“It’s my first time here in Khaosan. I’d heard that it’s brilliant and fantastic,” said Matthew Bechus, as he and a friend tuck into Thai delicacies at a stall nearby. “Now that the footpaths have been cleared, it’s sad. It’s a big tourist attraction and brings income for people and jobs and everything. I hope it comes back.”

Russel Green, a tourist from South Africa said the new Khaosan was nothing special.

“If they clear out all the stalls, there will no longer be a reason to come to Khaosan,” he said. Green and his friend were “disappointed” while strolling through the area in the afternoon. “I would say tourists under the age of 30 visiting Thailand only come to Bangkok to visit Khaosan Road. Without Khaosan, they will have no reason to visit Bangkok. They will go straight to Phuket,” he predicted.

Under the new restrictions, Khaosan Road now looks like any other place in Thailand. While most of the 30-million annual visitors are foreign, not all choose to stay in the area’s hostels, guesthouses and hotels.

Rujira Raokhekit, a Thai who came with her boyfriend, said: “I have been here many times at night for parties. I don’t usually come to Khaosan during the day, but I think today it is quieter than before.”

The peak selling hours for vendors and stall owners used to be from 2pm to 5.30pm, vendors said. After 8pm, people usually come for food, music and beer.

When daytime trading was banned, Bangkok officials allowed them to set up stalls from 6pm, which vendors say will only give them three hours to sell their goods.

“After that, the music is too loud and the crowd is not in the mood for shopping,” said Sukwasa Kurattana-sinchai, who has been selling T-shirts on Khaosan since the Tom Yum Kung crisis hit Thailand in 1997.

“Most of our customers are backpackers who came to stay in budget guesthouses. They often travel light and come here specifically to buy comfy cotton pants and sleeveless T-shirts to wear for their whole trip,” Sukwasa said, as she waved at a group of backpackers.

She said that from about 8am until late afternoon, Chinese tourists would normally drop by Khaosan after visiting the Grand Palace and enjoy an hour-long shopping spree. Most foreign tourists visit Khaosan in the morning for souvenirs before their flights home in the afternoon.

Most vendors believe that clearing out the stalls is a bad move.

“The prices in shops are usually high, which is probably why the stalls are banned in the afternoon,” said another vendor as he waited to set up his bag stall at 6pm. “Now you see most tourists walking without any shopping bags.”

If the ban continues, tourists will not bother to visit Khaosan, he said. “They won’t even stay close to Khaosan. Why should they? There is nothing to buy during the day. They could book a hotel in Pratunam or Bo Bae [two famous shopping districts a half-hour ride from Khaosan] and take a tuk-tuk to Khaosan for the nightlife,” he said.

Bangkok deputy governor Sakoltee Phattiyakul said after a meeting with related agencies on Friday that to help solve the problem, the BMA will draft a regulation allowing Khaosan vendors to trade from 4pm until midnight.

The regulation will includes pavement trading in nearby streets of Banglamphu such as Rambutri, Chakrabongse, Krai Sri, Sip Sam Hang and Tani.

Over the next 10 days, Phra Nakhon district will collect opinions from street vendors and building owners. “All vendors must register with Commerce Ministry. We will make it legal and transparent,” he said.

“We are trying to find the middle ground for everyone. The street vendors can’t have everything. They can’t expect to use the footpaths all day.”

He added that the vendors must not block the footpaths and stalls can be no bigger than 1.5 square metres.

“We will also ensure that there is one stall per vendor,” Sakoltee said in response to claims by Bangkok officials that some vendors owned as many as seven stalls.

“Ideally, I want Khaosan Road to open 24 hours. They think vendors are greedy. But actually, stalls could help look after the street’s hygiene.”