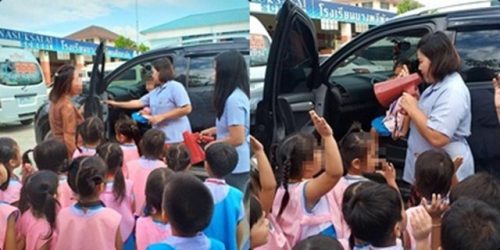 Teachers show youngsters how to escape from locked vehicle. (Photo:-Manager)

Kindergarten teachers at a school in Bang Plee south east of Bangkok have been praised online for conducting training for little children in how to exit a vehicle if they are locked in alone.

Three clips of the training were shown on the page of Gantanat Chalong on Facebook.

The three to five year olds at Bang Plee Pattanasuksalai were shown how to disable the central locking mechanism and told they could do this on their parents’ vehicles too if they were left behind by accident.

The class was widely praised by netizens who saw it as a positive step in the wake of yet another needless tragedy that saw the death of five year old Nong Yaem in Khon Kaen earlier this week.

She died after being left in a pick-up all day by a teacher who took her and other pupils to school in a pick-up.