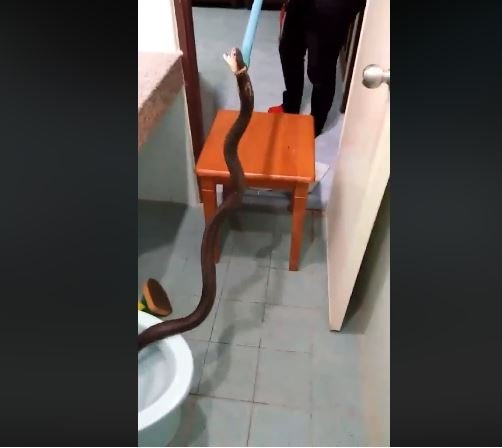 This is the hair-raising moment a king cobra was caught inside a toilet bowl.

The resident went to the bathroom in Krabi, southern Thailand, and noticed the reptile poking its head through the water.

They called the emergency services who arrived at the single-storey property and carefully lassoed the 5ft long serpent with a snake-catching pole.

Footage shows the cobra, with its distinctive dark band around its neck area, being pulled out of the toilet after a five-minute struggle.

Workers from the local rescue foundation stuffed the snake into a bag before it was released back into the wild several miles away.

Homeowner Khun Gommaton, 50, said he had lived in the house with his wife for three years and this was the first time they had a snake inside.

He said: “We have a fence around the house to keep out animals. The cobra has still come inside.

“There’s a forest behind our home. It probably lived in there then came through the drain and appeared in the toilet.

“I feel better now the snake’s gone. My wife’s a bit nervous about going to the toilet though.”