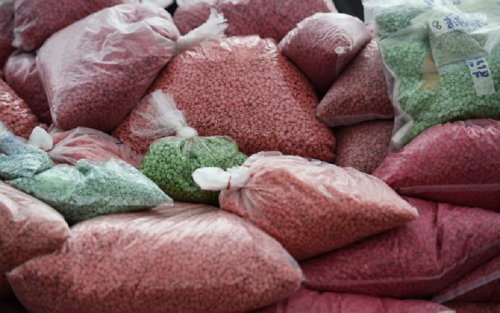 Drugs bags containing methamphetamine, known in Thai as ya ba, or crazy medicine, after being confiscated by authorities

Six billion baht (US$184 million) worth of illegal drugs were intercepted by Thai authorities in two locations on Monday, interrupting supply lines to different parts of the country and overseas.

The first major haul was discovered by the Narcotics Suppression Bureau after officers intercepted a pickup truck in Sukhothai in the lower north, while a second pickup was intercepted in Satun in the far south. Drugs worth more than 3 billion baht were found in each of the two vehicles.

In Sukhothai province, police arrested one man and three women who were alleged drug couriers from northern Tak province. They were stopped near the Sukhothai-Tak bypass in front of the Dairy Farming Promotion Organization of Thailand. A total of 10 million methamphetamine pills and 35 kilograms of heroin were discovered hidden under chicken manure in the back of the vehicle.

According to the Narcotics Suppression Bureau of Thailand, which oversees drug cases, the four drove the pickup truck carrying methamphetamine and heroin from Chiang Rai in the far north. The drugs were supposed to be delivered to the southern region as well as being exported.

They added that drug ring leaders hired Hmong people to smuggle drugs and hid the drugs in agricultural products, including many that give off a strong odor. They also said drug gangs told the couriers to travel with women to avoid suspicion.

In the second major drug bust on Monday, in southern Satun province, a village chief in Nikhom Pattana district alerted police about a pickup truck that had been parked at an abandoned house in the village. After conducting a search, police found 279 kilograms of methamphetamine worth about 3 billion baht behind the driver’s seat and in the back of the pickup.

Police assumed that a drug smuggler was driving into Nikhom Pattana district, saw a police checkpoint and became nervous and parked the pickup truck carrying the drugs at an abandoned house and ran away.

Police also found a phone number inside the car. After investigating, police said the number belonged to a person in Satun province who had an outstanding warrant for his arrest. Investigations are ongoing.