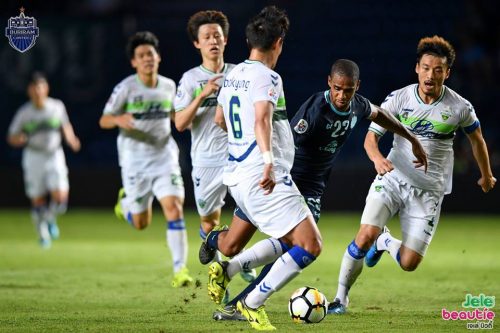 Buriram beat Koreans but the tie is in the balance.

Buriram’s romance with the Champions League continued with a 3-2 victory over heavily-fancied Jeonbuk Hyundai Motors. It looked like it was going to be even better for the Thai champions when they led 3-1 but a stoppage-time goal for the Koreans gave them a second away goal leaving the advantage with the K League leaders.

Buriram grabbed an early goal in the 7th minute when Junsoo’s pinpoint cross was headed home at the far-post by a jubilant Edgar. It certainly stung the Koreans who upped the tempo and aided by a referee who allowed plenty of physical contact began to bully Buriram, particularly in midfield.

They were quick and very physical and for much of the half Buriram were content to simply bang the ball downfield to relieve the pressure. However, Buriram weathered the storm and an excellent tactical substitution near half-time certainly helped their cause. Supachok had been totally ineffective and was not relishing the physicality. So he was taken off and replaced by Supachai.

The second-half was a completely different story as Buriram began to exert pressure on their illustrious opponents. However, Jeonbuk grabbed an equalizer in the 50th minute. It was a disappointing goal to concede for two reasons. Firstly, it was poor defending as Lopes was afforded too much room in the box.

More significantly it should never have been allowed to happen as Diogo was clearly fouled deep in the Korean half before the ball was moved forward. It was just one of a number of puzzling decisions made by the referee for both sides as he let both sets of players get away with far too much.

If this was supposed to knock the stuffing out of Buriram, it certainly didn’t. Diogo was causing them all sorts of problems and as usual he was coming in for some heavy “treatment” . He made the visitors pay on the hour mark with a sublime piece of skill. Buriram were awarded a free-kick just outside the area. Diogo stroked the ball over the wall and the keeper could only stand and watch as the ball nestled in the net.

Only one word can describe it……perfection !

Nine minutes later Buriram were in dreamland when Edgar scored a sensational individual goal. Picking the ball up just inside the Jeonbuk half he ran at the retreating defenders. Showing superb control under pressure, he kept on going before turning inside a defender and coolly placing the ball past the wrong-footed keeper. Brilliant and it leaves you wondering why he hasn’t produced this level of finishing before. Even his first goal was a perfectly placed header.

Buriram were far from finished and an incisive move down the right saw Diogo meet the cross on the volley but the ball flew just too close to the keeper who made an excellent save.

Just when it seemed Buriram were going to take a useful two goal lead to Korea they were hit by a sloppy goal in stoppage time when Praweenwat failed to deal with a ball into the box and Junho was left with the simple task of smashing it past a helpless Siwarak.

Disappointing, yes but Buriram deserve a lot of credit for the way they got on top of one of the best sides in SE Asia. Once again, they have proved they can live with the best and even though the advantage now rests with Jeonbuk, write this Buriram side off at your peril !

It’s back to league action on Saturday, May 12 when Buriram visit Police Tero who are coming into a bit of form. Kick-off is 5.45pm.