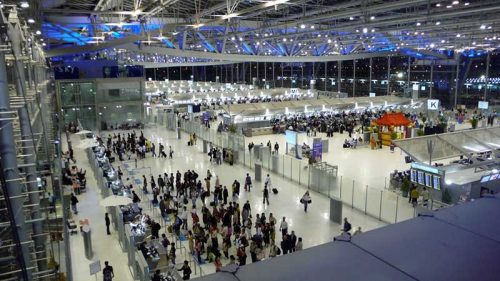 While there was still an increase of 4% on the previous year it was a blip in the trend that has seen an average 9% extra usage per month since the start of the year.

Nitinai Sirisamatkarn, a senior manager at Airports of Thailand Public Co Ltd, was quick to say that the downturn had nothing to do with Chinese people cancelling their holidays.

Many in the tourism sector fear the boat accident in Phuket was affecting tourism.

Nitinai said that the reason was less arrivals of European visitors on long haul routes into Suvarabhumi.

The AOT would discuss the reasons behind this in August, he said.

He was still upbeat saying that it would still be a record breaking year with the October to December high season expected to boost figures.

There are expected to be 135 million users of Thai airports this year.

Since the start of the year there have been 71 million airport users with Suvarnabhumi accounting for 31 million, Don Muang 20 million and Phuket 9 million.

In the last nine months there have been 61.2 million foreigners using Thai airports – a rise of 25.11 per cent Thai TV CHannel 7 quoted Nitinai as saying.

Times comment:- No need to discuss anything, the Thai baht is too strong. However, the Moto GP in October will see all records broken.