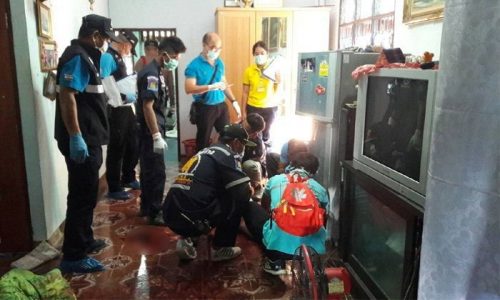 A Phoo Yai Ban (village headman) told reporters how a woman in his area was always coming to him to complain about her Thai husband and the arguments they were having.

Her new man just was not keeping her to the manner that she was accustomed, Sunan,49, told Aphisit Surachartmethin of Ban Khawao in Korat.

Her previous husband was a foreigner who before he died from illness kept her in the lap of luxury.

Now he was gone she was left with 41 year old Hin – he had no job and neither did she and they were always at each other’s throats in the four years they had been husband and wife.

But, as Aphisit related to reporters on Thursday, he still didn’t believe Sunan when she came to see him to say that she had killed Hin by attacking his ankle with a kitchen knife.

He thought it was just another tale of their marriage strife but she did appear pale so he went with her back to the house to investigate.

There at the two story wood and cement house he found a bloodbath and everything scattered all over the place.

Hin was lying dead dressed only in shorts and there was a bloodstained knife some five metres from the body.

The Chumphuang district cops were called and Pol Col Chinkorn Jaikla took Sunan in for questioning and charged her with assault causing death.

Medics said that the five centimetre gash on the left ankle had hit a main artery and the victim had died from blood loss.

Aphisit added that Sunan had told him that Hin had kicked some plates while she was eating – enraged, she attacked the leg that had done the kicking.

Times comment:- So one up to the farangs then !