Man Arrested And Handcuffed After Filming Thai Police In Bangkok 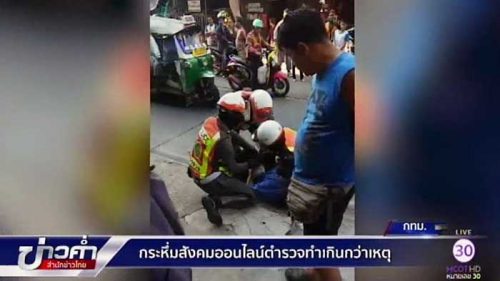 The Thai police have defended their actions after arresting a man who had been filming them.

Police said that the man was drunk and disorderly and damaged property and that people online had got the wrong idea about what happened.

So much so that today they plan to hold a news conference at the scene of the event in Klong Toey, Bangkok, where the man at the centre of it all will explain what happened.

The clip of the arrest went viral as many officers took down Pramok Rortthiang. People suggested that he was unfairly treated by the cops just for filming.

But traffic police spokesman Sironwit Inthorn said that the public were not in full possession of the facts following the incident near the Klong Toey market on Friday.

He said that Pramok was suspected of being an illegal immigrant but he fled after being asked for his ID. He had also damaged a mirror.

Sironwit said that he was taken to Thong Lor station where his credentials were checked and he was found to be a Thai national. He paid compensation for the damaged property and also apologized to the police, he said.

Pramok is set to attend a press conference today at the spot where the incident occurred to put the matter straight.