Man Electrocuted Trying To Recover A Bag Of Money 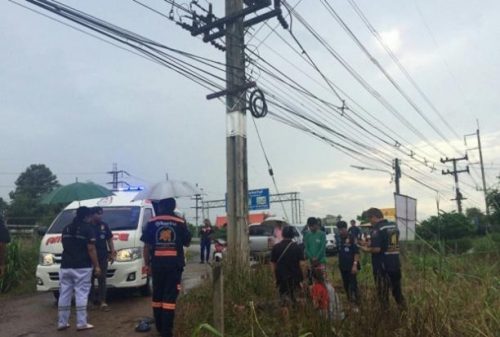 A man was electrocuted while trying to recover a bag of money tied to a balloon caught on high-voltage power lines on Wednesday afternoon. The incident occurred beside Suwansorn Road near Phra Prong village in Kabin Buri district.

After rushing to the scene, police found a man, identified as Ratthawut Phanompha, 20, lying unconscious near a 20-metre-high power pole opposite a local shrine.

A 10-metre long bamboo stick with a sickle tied around one end, and a mobile crane were found nearby. Emergency service personnel performed cardiopulmonary resuscitation on the man, but to no avail and he later died.

Apparently three months earlier, local people held a merit-making rite at the shrine to pay respects to the relics of the dead, and released balloons into the sky as part of the rite. One balloon was attached to a bag said to contain 9,999 baht.

The balloon had become snagged on the power pole opposite the shrine. Several people had previously made unsuccessful attempts to climb up the pole to take the money .

Ratthawut, accompanied by his wife, made his attempt on Wednesday. He hired the crane for 2,000 baht to raise him high enough to reach the balloon atop the power pole, planning to use the sickle tied to the bamboo stick to hook the money, said his wife, who did not want to give her name.

However,the crane brought him into contact with the high-voltage power line. He was electrocuted and fell to the ground.

The man’s body was sent to Kabin Buri hospital for autopsy.

Later, provincial electricity officials were called in to take down the deflated balloon, and found only 825 baht in the bag — not 9,999 baht, as the dead man had believed.