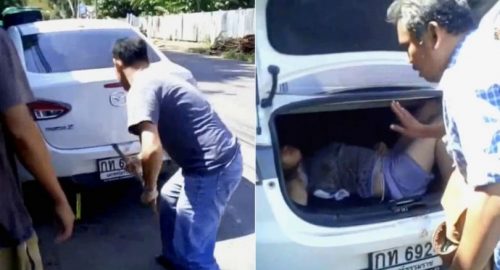 Police are searching for a Thai man who stabbed his ex-wife and left her to die in the locked trunk of a car in Surat Thani’s Muang district on Sunday.

The victim Sunantha Pirom, 38, is recovering in hospital with serious stab wounds.

She said on Monday that she met her ex-husband Narong Inthong, 40, at a resort to sort out problems they were having with their relationship and they stayed together overnight. They have three children.

Apparently at 5am on Sunday he stabbed her without provocation and she pretended to be dead. He then locked her in the trunk of a car and drove to Soi Na Dan behind Wat Mai Pattanaram, where he left the car.

She said she screamed for help until local people heard and prised open the trunk to save her. Images of her rescue went viral on Thai social media.

Muang Surat Thani superintendent Pol Colonel Sirichai Songwasin said police had secured an arrest warrant for Narong who is believed to be hiding in the province with his children.

Police suspect Narong was angry that his ex-wife, who broke up with him three months ago, refused to return to stay with him in Chang Klang district.