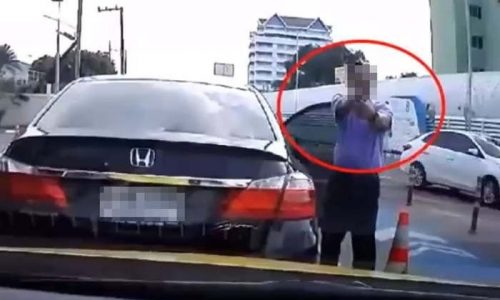 A man who was caught on camera threatening another motorist with a gun outside the government’s Chaengwattana complex is a senior member of the National Anti-Corruption Commission (NACC), it has been revealed.

The armed man was named Piset Nakapan, assistant secretary-general of the NACC.

A clip that went viral on social media on Monday showed Mr Piset get out of a black Honda car and point a gun at the driver behind.

The incident, which is believed to have taken place last Wednesday, occured when the driver of the car with camera slowed down for oncoming traffic.

A car can heard tooting its horn and then the black Honda is seen overtaking the car with the camera.

A man can then be seen getting out of the vehicle with a gun.

It is not known if the gun was real of an imitation firearm.

Police and government officials are aware of the incident and have requested Mr Piset report for questioning.