May Presses Prayut On Election Issues 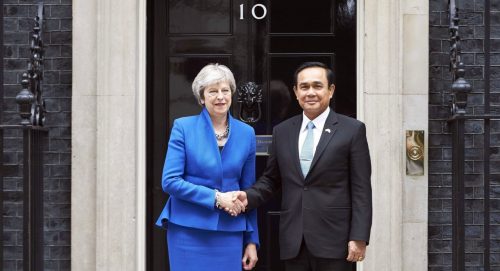 Mrs May and General Prayut

British Prime Minister Theresa May told Prime Minister Prayut Chan-o-cha to continue progress towards free and open elections in Thailand in line with international standards, including lifting restrictions on political parties at an early stage, a Downing Street spokesperson said.

Prayut met with May on Wednesday  in London when the Thai junta chief arrived for a visit to cement ties and cooperation, notably on economic matters.

May said at the beginning of the meeting in front of cameras that she expected to see an election in Thailand in early 2019.

Prayut said in reply that his government was moving towards democratisation. “I reaffirm that the election will take place early next year. We are now preparing many legal instruments [for the poll] and many of them have already been promulgated. In the meantime, we are also preparing for the coronation ceremony,” he said.

The two premiers also discussed the importance of continuing to cooperate on a range of shared international security challenges, including working together to tackle human trafficking, and strengthen the ability of the Organisation for the Prohibition of Chemical Weapons to attribute chemical weapons attacks, according to May’s spokesperson.

They also discussed the importance of the international community in continuing to come together to counter violent extremism and enhance cybersecurity, and to take forward efforts to tackle illegal wildlife trade.

Regarding trade, the two leaders agreed that as the United Kingdom leaves the European Union, the bilateral trade and investment relationship would continue to go from strength to strength.

May welcomed the work of the UK-Thai Business Leadership Council in identifying areas where bilateral trade could be further liberalised, according to the British spokesperson.

Prayut is leading a Thai delegation to UK and France until next week aimed not only at international recognition after the EU resumed political engagement with military-ruled Thailand at all levels, but also for business deals.

Industry Minister Uttama Savanayana and Eastern Economic Corridor (EEC) Office secretary-general Kanit Sangsubhan yesterday joined a round table at Asia House in London to explain the government’s economic strategy and its pet EEC project with the hope of luring British investors. Some 20 business executives from leading companies such as ARUP, HSBC, KPMP, Shell, Prudential and Wood Plc attended the session.