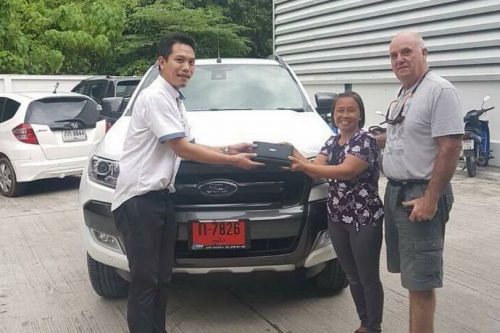 Alan Hogg, 64, and his wife Nott, 61, are seen with their brand new pick-up truck which was taken //(Image: Viral Press) Mirror

Fears are deepening that the Phrae couple missing since last Wednesday have been murdered.

Thai media reported that police will resume a search of their property this morning amid fears they are buried there.

Unconfirmed reports suggest that the brother of Nott Suddaen, 61, hired three men to murder her and Alan Hogg, 64.

Mr Hogg, originally from Scotland who had lived in Australia, was reportedly shot by a duck coop.

His wife was then hammered to death in a garage, the reports said.

Bloodstains were earlier found in that area that someone had tried to clear up.

Police had already used a backhoe to dig an area without success.

Three men reportedly in custody are to show police this morning where to start digging.

Nott’s brother Warut Ratanasatjakit has reportedly fled bail after he paid someone 3,000 to sell the couple’s white Ford pick-up that has been found. The latter information was reported by TV Channel 3.

He allegedly paid 50,000 for the couple to be murdered after long term disputes.

Media around the word are calling the missing couple millionaires.

It is believed she was in the company of a German family friend acting as interpreter when taken to her parent’s property by police.

It was reported in the UK that Mr Hogg was originally from Scotland.

Those said to be in custody over the incident have yet to be named by police.