Monks Behaving Badly Again As Altercation Is Caught On CCTV 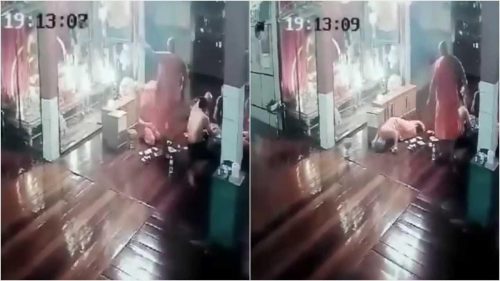 An assistant to an abbot at a Nonthaburi temple is upset with an underling as he counts money taken during Friday’s Loy Krathong festival.

But the altercation – caught at a distance on CCTV – soon turns very nasty as the bigger monk kicks out at the other catching him around the neck.

The monk goes sprawling to the floor and appears momentarily unconscious.

But after a few moments he recovers to continue the counting as the assistant abbot continues ranting.

A post in the comments section on a Facebook page said the incident happened in Ban Mai sub-district of Pak Kret in the area to the north of Bangkok.

The post claimed that the aggressive monk was into gambling on the underground lottery and cock fighting.

It claimed he had assaulted monks before and the clergy at the temple was suffering because of him.

At one point a very rude Thai swear word almost never used for monks was only half scribbled out indicating extreme dissatisfaction with the monk’s behaviour.