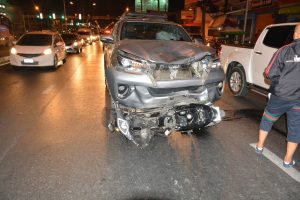 A motorbike driver has died after he collided with an SUV that ran a red light in Koh Kaew last night.

The Phuket City Police report that they were notified of the incident at 8pm at a Koh Kaew intersection.

Police and emergency responders arrived to find a motorbike stuck in front of an SUV. The motorbike driver was taken to Mission Hospital Phuket where he was pronounced dead.

Police says the SUV ran the red light and collided with the motorbike.

Police are continuing their investigation and will press charges later today.