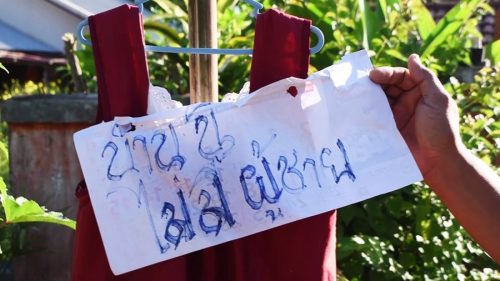 No need for this say doctors (Photo:-Workpoint News)

Expert medical staff in Thailand’s north east have confirmed that a spate of unexplained deaths in a village in Kalasin are not the work of an angry group of ogres or ghosts of evil widows.

Men were particularly afraid of the widow ghost or Phee Mae Mai – they had started painting their fingernails to trick the evil spirit and their womenfolk had put out clothes and signage to say: No Men Live Here.

And everybody thought the ogres – Phee Pop – were going to strike again,so it was home to bed early every night. The only sounds that could be heard were those of barking dogs – themselves believed to be portents of doom.

Now doctors have gone into the village to say there is a perfectly rational explanation.

Dr Pornphat Phunaklom the director from nearby Nong Kung Sri Hospital has blamed a whole host of diseases that exist under the umbrella of NCDs – non-communicable diseases or diseases that are not transmitted from one person to another.

According to the WHO these account for 71% of all deaths worldwide. They include cardio vascular problems, cancer, respiratory diseases, diabetes and high blood pressure.

Dr Pornphat dismissed the villagers suggestions about ghosts and ogres during a crisis meeting yesterday.

The expert doctor blamed far more earthly problems like diet, alcohol and cigarettes and even sleeping too late.

People should watch what they eat he said especially if they were ingesting too much sugar, salt or fat.