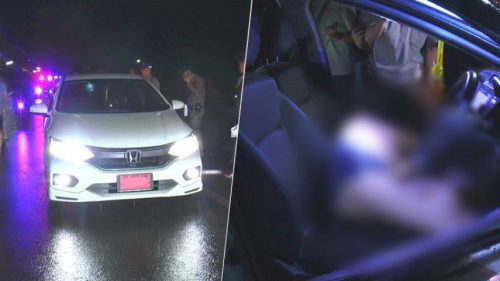 A divorced woman was shot dead in her car in Nakhon Pathom’s Muang district early on Tuesday after she was asked by a man to meet and discuss their relationship, police said.

Muang Nakhon Pathom police were alerted of the killing at 3.30am on the Na Chum-Na Samg road in Tambon Nakhon Pathom of Muang district.

Naapathorn Kanokasemsophon, 24, was found dead in the driver’s seat of the car with three gunshot wounds.

People in the neighbourhood said they heard gunfire at 3am and found the woman’s body when they went to check.

When police checked the woman’s smartphone they found that a man, identified by his account name of Wallop On A Way, asked her to meet him in person to talk and he would stop bothering her.

Police said the woman was divorced and moved from Ratchaburi to live in her home province of Nakhon Pathom.