Continuing the serie of the Provinces in the North-East Region: 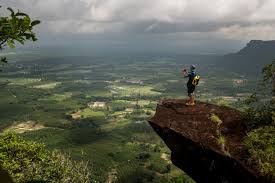 Nakhon Phanom, once the centre of the ancient Sri Kotrabun Kingdom, lies along the western bank of the majestic Mekong River, although over the centuries it has moved back and forth across the river. The lovely setting of Nakhon Phanom town is enhanced by the rugged beauty of the jungle-covered mountains that lie beyond the town of Thakaek on the Laotian side of the river. King Rama I chose the name Nakhon Phanom, City of mountains, because of the remarkable mountains found in the province.

Partly a result of its long history, Nakhon Phanom is a melting pot of diverse ethnic cultures and traditions, particularly represented by the Lao, who have lent a strong influence to the architecture, customs, and cuisine of Nakhon Phanom, including the Bai-Sri-Su-Kwan welcoming ceremony.

Throughout the history of Nakhon Phanom, Laotians and people from smaller ethnic minority groups migrated across the Mekong River giving modern Nakhon Phanom a distinctive cultural fusion that is apparent in the local language,

Things to do in Nakhon Phanom:

1. Take A River Cruise Along The Mekong The most popular of things to do in Nakhon Phanom.

If you’re heading anywhere near the Mekong then we recommend jumping on a boat and taking an hour cruise up and down the river.

It’s the opportunity to literally sit in between two countries and although it’s not the cleanest water in the world, it’s definitely an opportunity to add a big fat tick to the bucket list!

If you don’t fancy river cruising then many of the guys on our trip recommended taking bicycles.

So off we set with our helmets for an early morning ride on our penultimate day!

We got up at 5am and rode around the town, which is very popular for cycling among locals.

There’s a bike lane that runs all the way along the promenade and matches the Mekong River for around 13km. Making for a beautiful way to start the day!

Wat Phra That Phanom is one of the most photogenic temples we’ve ever seen.