The following was posted on Thai Visa after the author watched a video.. It is difficult to disagree with any of the comments. See what you think.

If driving, especially on a motorbike, treat the activity as an act of war, in a sense that you may be mowed down or killed at any moment. Maintain eyes in the back of your head. Watch everyone. Expect craziness, insanity, lack of reason, and a complete lack of courtesy and respect on the roads, at all times. Expect cars and trucks to be coming at you in the wrong lane. Expect people to overtake you with the slimmest of margins. Expect trucks to be driving very slowly in the fast lane of a highway.

If riding a motorbike, only do so if you have many years of experience. Especially on the southern islands, where huge numbers of foreigners leave Thailand in a wooden box. Wear the best helmet you can afford. And drive like a grandmother. This applies to ex-pats too. Bring along an international drivers license, or better yet, a Thai motorcycle license. This helps you to avoid being fleeced by the local police franchisee.

The police only show up after the accident takes place. There is nothing in the way of traffic safety on the roads, or on the highways. Those traffic stops are all about weapons, drugs and handouts. Nothing to do with safety. I suppose there is no money in traffic safety. However, if they levied real fines for speeding over 120kph, for reckless driving, making severely quick lane changes, etc, there would be some money to be made, and the highways would be safer. 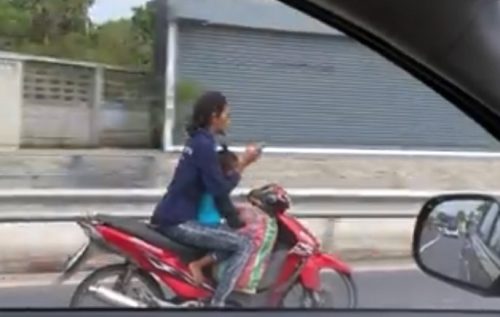 A video shared on Facebook shows a woman riding a motorbike and using her smartphone, while a young child sits in front of her.

Neither of them are wearing a helmet.

The shocking footage is believed to have been taken in Phuket on Wednesday, with the clip shared to the Phuketalive Facebook page.

Approximately 25,000 people are killed on Thailand’s roads each year, with around three quarters estimated to be motorcyclists.

Data released earlier this month revealed that around 7,000 people have been killed on Thailand’s roads already in 2018.

Times comment:- Having recently returned from a trip to the UK where I hired a car for three weeks, it was immediately evident that speeding is almost completely non-existent now. The combination of cameras and heavy fines has done what it was supposed to do. I didn’t see anyone driving and using a phone either.

Yes, it can be a pain and journeys take longer but I never witnessed one accident, even on the always busy motorways. Nothing will change here until police abandon road blocks and get more traffic cops on the roads.