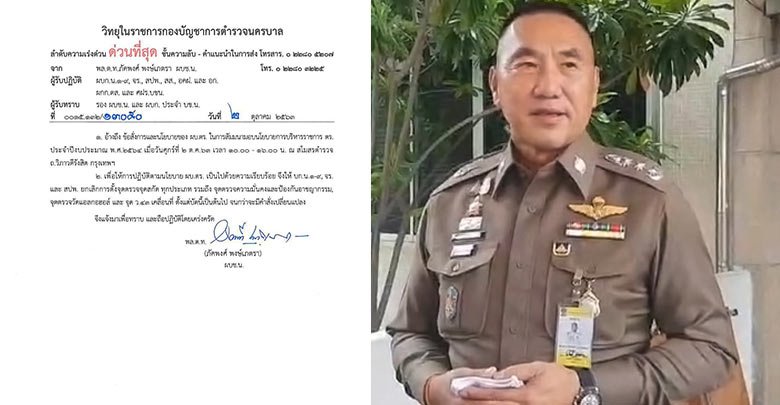 Thailand’s new police chief has begun his term in office by making a sweeping change that will affect the entire country.

Pol Gen Suwat Chaengyodsuk has called for an immediate end to all forms of roadside checkpoints in the country.

An order ending the notoriously unpopular roadside checks was dated yesterday and published by INN.

This will mean an end to roadside checks for DUI in particular as the new chief wants to see greater transparency with tests being done in hospitals.

Speaking to 496 senior officers at an event in Bangkok yesterday, Gen Suwat spoke of his five year plan to bring greater transparency to the RTP and inspire confidence among the public, especially the young.

He ordered his men to do their jobs in a proper and dignified manner and promised new faces in command positions, greater use of technology and improved efficiency in a drive to improve the help given to the public.

While these are general comments to be expected of any incoming chief there were some specifics apart from the checkpoint ban to go with the rhetoric, notes Thaivisa.

In Bangkok the chief has ordered 5,000 new CCTV cameras to be installed in the next 4 months to help the police.

Regarding gambling, he has promised severe action against any police involved in turning the other cheek.

It is widely recognised that the police are inextricably woven into the fabric of illegal gambling in Thailand, notes Thaivisa.

He promised an end to big casinos operating with apparent impunity.

He also called for greater transparency in the process whereby police get new positions and an end to the buying of positions.

Naew Na called the new chief “Big Pat” in one of their headlines that referred to an end of checkpoints, and the flushing out of casinos and online betting.

Those who doubt the resolve of the chief to make a difference regarding the unpopular checkpoints may look to Bangkok, notes Thaivisa.

Roadside checkpoints on main roads were ordered to stop several years ago in the capital after a new police chief came in.

And that is exactly what happened.

But whether the new edict filters through to places like Pattaya where shakedown checkpoints are legendary remains to be seen.