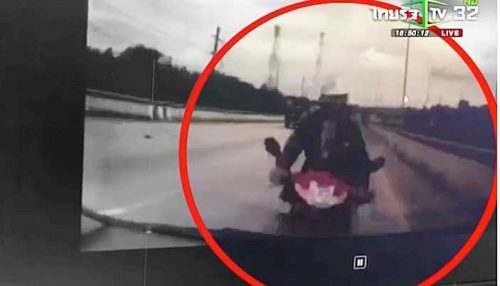 Driver had no chance of avoiding motorcycle rider

A dash cam video from the car of a New Zealander driving in Rayong showed the moment he collided with a Thai motorcyclist going the wrong way in the right lane on a bridge.

The 28 year old motorcyclist was killed. He was named as a local employee called Worawut.

Apparently , he was trying to save time by going the wrong way.

The New Zealand driver – in a Mitsubishi Space Wagon – was not named but was said to be 40 years old.

The family of the dead motorcyclist do not intend to pursue the case.

The presenters warned the public that such “time saving” could result in death.

No mention was made of compensation in the case or the fate of the New Zealander.

He had told police that after going over the brow of the hill he could not brake in time to avoid the motorcyclist.

Times comment:- The video was published but we felt it would be inappropriate and distressing for the dead rider’s family. I myself, yesterday witnessed a motorcycle rider driving at very high speed on the wrong side of the road in town. When are these people ever going to learn?