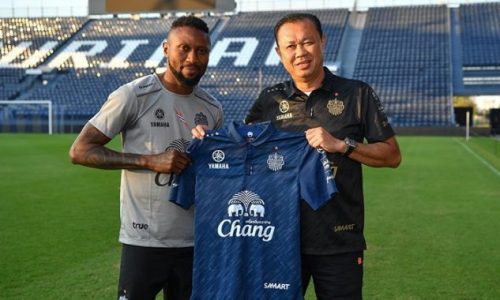 Samson with Newin Chidchob on his arrival.

Samson joined Buriram United in order to fill the ASEAN player quota. However, he left the Thunder Castle club after playing for the club for just 33 minutes in 2018 Thai League.

The Nigerian-born Vietnamese striker was confirmed to have rejoined his former club Hanoi FC in Vietnam on Friday.

In a press conference on Sunday, Buriram chairman Newin said that the club terminated their contract with Samson because of his unsuitability with their tactics.

“He wants to stay with the club. He is really a good player, but he is not suitable for Buriram’s playing style,” Newin stated.

“On principle, foreign players are welcomed in Buriram. But I must focus on their ability. They should be better than our Thai players.

In comparison, Samson does not outweigh our Thai players, thus we must use them for the development of the Thailand national team in the future.”

After the departure of Samson, Buriram United will be in search of a new ASEAN player to fill in the squad.

Of course, they will not be available to play until after the June mid-season break.

It is a shame things have turned out this way. Having watched videos of Samson in Vietnam, I was excited by his arrival. There are those who will say he wasn’t really given much of a chance and they have a point.

However, in the times he has got onto the pitch , he has not really impressed. Perhaps he was trying too hard as when we spoke shortly after his arrival, he said he was desperate to make an impression and stay for three years.

But Khun Newin makes a valid point, the foreign players have to be better than the young Thais who are trying to break into the team. (Though some seasons in the recent past don’t bear that out.) We don’t see players in training and practice so the club should have a better idea than us of their true ability.

I hope Samson continues his previous success in Vietnam as he seemed a really nice guy when we met. Now the search begins.