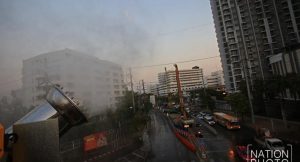 The smog is here to stay unless the government puts people’s well-being ahead of economic development and pursues long-term strict pollution control measures, academics warned.

Environmental experts said though it was too late now for the authorities to prevent health impacts from the severe current seasonal smog and people have to take care of themselves, all related official agencies needed to get serious about tackling the air pollution problem.

They called for a road map to create a Pollutant Release and Transfer Register (PRTR) and study the pollution-carrying capacity of each area, to prevent the recurrence of smog in the future.

Tanapon Phenrat, an environmental researcher at the Faculty of Engineering Naresuan University, said if we want to end the hazardous smog problem for good, every stakeholder, especially the official agencies, must face up to the truth that the serious air pollution problem from very fine dust particulate matter – PM2.5 – has been a threat to the public’s health for a long time. And no one has an idea on the source of these harmful PM2.5.

“Even though we can guess the primary sources of air pollution, and many experts have come out with scientific speculations on the possible sources of smog, we have to admit that there is no academic research at all that clearly determines the components of Bangkok’s smog or the extent of each source’s pollution emission amount to the overall pollution in the air,” Tanapon said.

He pointed out that as we aim to sustainably solve the air pollution problem, the authorities needed to implement long-term measures to determine the sources of pollution, monitor the emission at each source, and control the pollution emission at the source.

“Therefore, all related agencies need to work together to set up a PRTR system to let all stakeholders see a big picture of the real-time situation of pollution generation and emission,” he stressed.

“This will make it easier for the pollution control agencies to set out the strategy and enforce legal actions against the major polluters to mitigate air pollution before people get sick.” 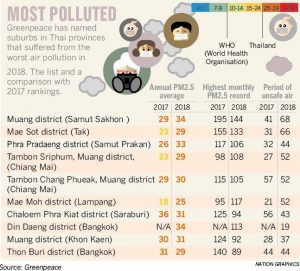 He also suggested that the authorities should study the carrying capacity of each locality to determine the ability of the area to cope with pollution. The Environmental Impact Assessment consideration process should be reformed to include an examination of the overall environmental impact from every project in the area, not just judging within that specific project. This can prevent pollution problems caused by poor planning.

Tanapon insisted that even though his suggestions required many tough measures such as obligating all industries to install PM2.5 measuring devices at every factory chimney, enforcing stricter car fuel standard, or upgrading the safe limit for the pollution emission to international standard, this would be the wiser choice for the country in the long run.

“As of now we are equipped with all necessary technologies and legal approaches to implement my suggestions in reality,” he said.

“But as executing tough environmental protection measures can slow down investment and economic growth, the government must put the environment and people’s well-being first. In the long term, the country can get much more economic benefit from ensuring a healthy society than only prioritising economic development.”