Nothing “Fishy” About Sexy Coyote Dancers At The Prawn Tank 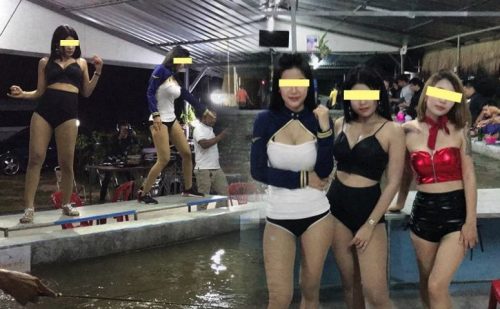 Prawns not the only thing on the menu??

The owner of a recently opened prawn fishing tank has defended his decision to have coyote dancers strutting their stuff as Thai men angled for crustaceans.

Pictures were posted on Facebook after the opening night of Prawn Fishing Tank SS Borwin in Sri Racha.

Panuwat Khlaisuban said that fishing for prawns can be a stressful business especially if the customers fail to trap any.

The women were on hand to relieve that understandable stress. And add a bit of spice.

But he said there was nothing untoward or obscene going on – the licenses were in order and there was CCTV to make sure no one did anything fishy with the coyotes.

But Panuwat said his customers liked the idea saying they hoped it would become a regular feature at weekends.