Number One Snake In Buriram? Meet The King Cobra 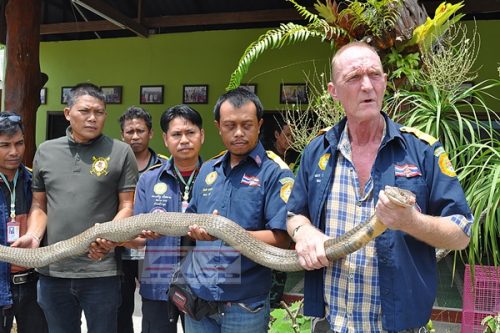 Following on from the article on how to deal with a venomous snake bite, I would like to examine individual snakes which are found in Thailand.

The locals call the King Cobra” Number One” snake, so it would be logical to deal with what is probably the most famous snake in the world first.

It is the largest venomous snake in the world, averaging 3 to 4.5 metres in length. Usual habitats are light woods, jungle, open grass lands and agricultural land. They are even found in the centre of Bangkok.

They also often live near water and can swim and climb extremely well. So you can see they are widespread yet how many of us come into contact with them ?

This confirms the belief that they are shy and will avoid contact with humans if they possibly can .

King cobras can move quickly with an upright body and are active day and night. Colours vary, tan, olive brown and black are common. Their lower bodies may also be marked with white or yellow  chevrons. Males are larger than females.

Young king cobras have contrasting black and yellow stripes, often being mistaken for the banded krait. King  cobras have two short, fixed fangs which can deliver enough venom to kill twenty to thirty humans with a single bite.

They can also kill a buffalo or an elephant.

A Banded Krait Which Young King Cobras Are Often Mistaken For

The venom is not the most potent in the snake-world but the sheer volume injected makes it so deadly. That’s why it is so important to seek treatment quickly. The venom affects the nervous system, resulting in respiratory failure.

The king cobra’s diet consists almost entirely of snakes, usually non-venomous ones. However, cobras, kraits and even other king cobras are on the menu. Prey is located by sight and smell and then pursued until a fatal strike can be delivered.

When threatened king cobras can raise the front third of their body off the ground, reaching up to 1.5 metres.

The hood is erected and the snake will give out a hiss which becomes a growl. Downward strikes are then made as a warning but they rarely try to bite.

The mating season is from January to March and the males go in search of females who give off an odour to show they are available.

When a pair find each other mutually attractive they intertwine their bodies and remain like that for several hours.

There are two chambers, the lower one for the eggs which are covered with leaf litter and the female lives in the upper chamber to guard the eggs. They are the only snakes to do this and it’s believed to be a sign of intelligence.

The eggs are incubated by the heat of the rotting vegetation and hatch from between 60 to 90 days.The female abandons the nest just before the young hatch, ceasing all further parental duties.

The young cobras are about 35 centimetres long when they emerge from the egg and have the same deadly venom as an adult. Many fall prey to civets, mongooses, giant centipedes and army ants until they are several months old.

King Cobras can live for more than 20 years in the wild but sadly their numbers are declining. This is mainly due to deforestation resulting in loss of habitat. They are also killed for their skins and many Thais consider them a great delicacy.

In a recent Thai survey, there were reports of 35 king cobra bites, 10 of which were fatal. These were probably due to being in an isolated area or more likely “home remedies” were used to treat the victim.

So this beautiful creature is not a real threat to us and it would be tragic if their numbers continue to decrease. Next week we will look at the snake responsible for most deaths in Thailand. Until then, just be careful where you walk !

Centipedes And Millipedes In Thailand

Scorpions In Thailand……..Are They Dangerous ? (Edit)