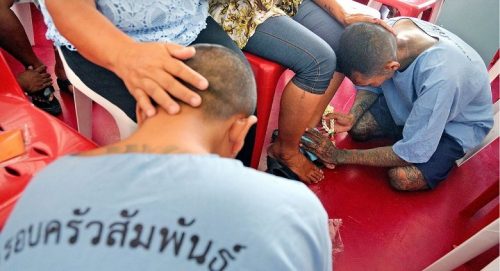 Prisoners can pay their respects.

Prisoners, including those with poor behaviour, are being given a chance to pay respect to their mothers throughout August, as Thailand celebrates National Mother’s Day on August 12.

This year is also the 86th birthday anniversary of Her Majesty Queen Sirikit of His Majesty the late King Bhumibol Adulyadej.

Corrections Department director-general Narat Savettanan said that 3,066 “good behaviour” inmates had been released on parole from late July to early August but his agency has implemented strict measures to prevent them from re-offending and society should not worry about safety.

The parole release comes as Thai prisons currently house more than 360,000 inmates, well beyond the capacity of 120,000.

Narat launched the plan at the Bangkok-based Central Correctional Institution for Drug Addicts in Bangkok on Tuesday.

The plan allows inmates, including those with poor behaviour, to get visits from relatives. He said he hoped the opportunity would help inmates turn over a new leaf.

During the launch of the plan, prison officials gave 100 flower garlands for inmates to present to their parents and cloths to wipe their parents’ feet to apologise for making the mistake that landed them in jail. The inmates also got to have a meal with family members.

One father, who is a fruit seller, tearfully said he came to represent his 39-year-old drug inmate son’s mother who died in 2001 and to give him moral support. His son said he had never openly expressed love to his parents and he felt good to be given the opportunity.

He said he would help his father selling fruit after he is released from prison and would turn his back on drugs.

Two brothers, aged 28 and 30, who were jailed for possession of marijuana and possession of crystal meth or “ice”, said they were glad to attend the event and see and pay respect to their parents at the same time. “This makes us happy and, with our parents’ support, we are inspired to be better persons,” they said.