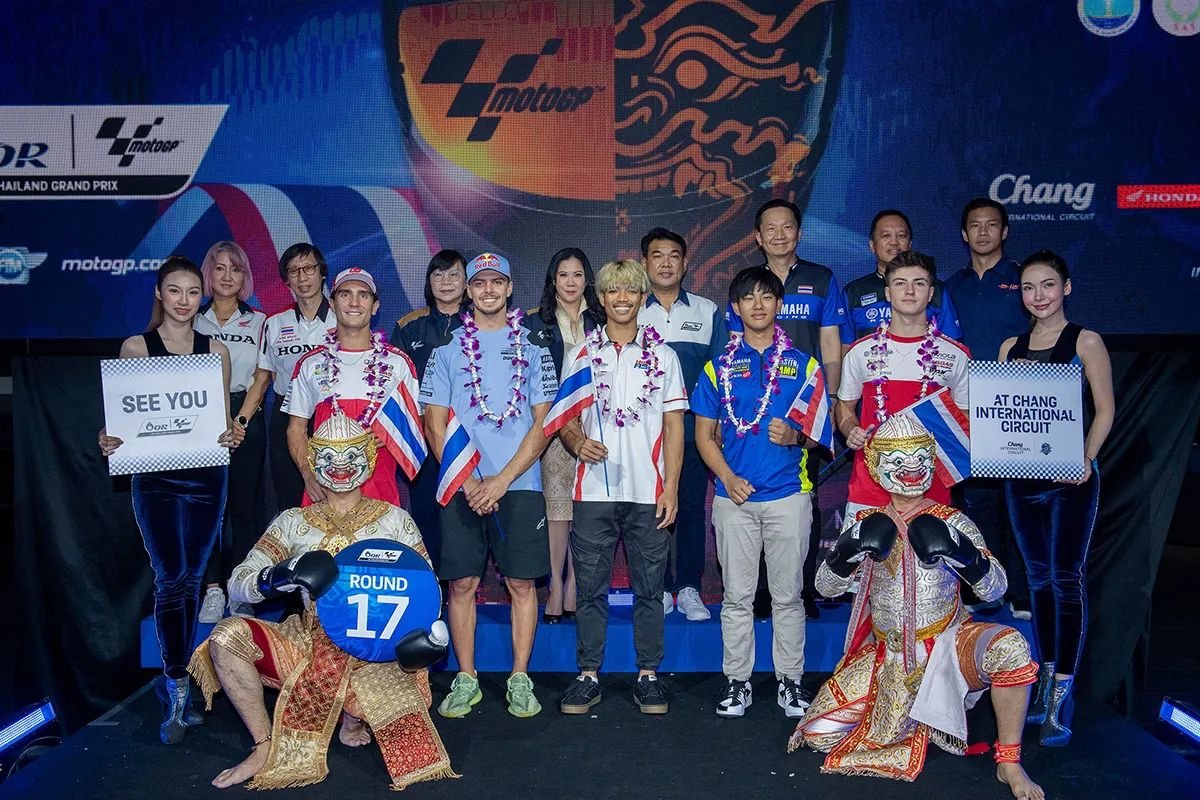 The third edition in Thailand of this World Championship motorcycle racing event is from 30 September-2 October, 2022, at the Chang International Circuit in Buri Ram province

The Tourism Authority of Thailand (TAT) is pleased to invite tourists to the 2022 MotoGP World Championship motorcycle race, the OR Thailand Grand Prix, which is making an exhilarating return this year and will take place at the Chang International Circuit in Buri Ram province this weekend, from Friday, 30 September to Sunday, 2 October.

To help promote the OR Thailand Grand Prix 2022, a pre-event “MotoGP vs Muay Thai” photoshoot was held in Bangkok on 27 September, which had MotoGP race riders learning the art of Thai kickboxing or Muay Thai at the famous Rajdamnern Stadium in a promotional video to be broadcast to MotoGP fans worldwide.

Mr. Yuthasak Supasorn, TAT Governor, said “We are thrilled to see the MotoGP racing event back again this year, both for the thrilling action and excitement it offers fans here in Thailand and around the world through its live broadcast, and for the enormous opportunity it presents in showcasing Thailand’s ability to host world-class sporting events. It fits well with the promotion of sports tourism in the kingdom.”

With PTT Oil and Retail Business Public Company Limited (OR) as title sponsor, this is the third edition of the MotoGP – the world’s number one motorcycle road racing championship watched by over 800 million people and broadcast live to more than 200 countries – in Thailand after the first PTT Thailand Grand Prix 2018 and PTT Thailand Grand Prix 2019. The thrilling sport has a large following in Thailand, where there are more than one million fans.

H.E. Mr. Anutin Charnvirakul, Thailand’s Deputy Prime Minister and Minister of Public Health, will preside over the official opening of the 17th race on the 2022 MotoGP World Championship, the OR Thailand Grand Prix, which is scheduled to be held on Sunday afternoon. He will also witness the MotoGP, Moto2, and Moto3 races.

Meanwhile, H.E. Mr. Phiphat Ratchakitprakarn, Thailand’s Minister of Tourism and Sports, will attend several events on Friday. Following a visit to the community park at the Chorakhe Mak Reservoir None-hunting Area and presiding over the opening of the Thai Sarus Cranes Community Tourism Festival, his schedules at the Chang International Circuit will include officially openubg the SAT SPORTS EXPO and the TAT’s Amazing Thailand booths and visiting other booths, including OR, HONDA, YAMAHA, CHANG, and the MUAY THAI EXPO.

In addition to the motorcycle races, the three-day programme features a music concert by popular Thai artists Joey Boy and Slot Machine on Friday evening, a Muay Thai or Thai kickboxing competition and concert by Thai singer, Katai Pannipa, on Saturday evening, and a concert by another Thai singer, Oat Pramote, on Sunday evening.

Tickets to the OR Thailand Grand Prix 2022 can be purchased at 7-Eleven stores nationwide, or through www.allticket.com.