Ordination Of New Supreme Patriarch To Be Held Today 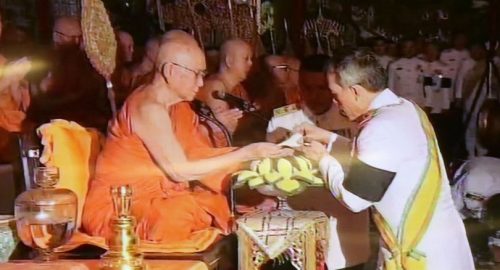 The new Supreme Patriarch with His Majesty.

The sacred appointment ceremony for the new Supreme Patriarch will be held today at the Temple of the Emerald Buddha– confirming Somdet Phra Ariyawongsakhatayan, the abbot of Ratchabophit Sathitmahasimaram Temple, as the 20th Supreme Patriarch of the Rattanakosin Era (since 1782).

Itthichai Saewong, a former monk at Ratchabophit Temple under Somdet , said the new Supreme Patriarch was a fit person to lead the religion given he was one of the most austere senior monks in the country and very humble.

“I am tremendously delighted to hear that my preceptor when I was monk at Ratchabophit Temple was nominated to be the new Supreme Patriarch. I wish I could make it to the official appointment ceremony to be a witness in this historic event,” he said.

Itthichai – a monk at Ratchabophit Temple from July to December last year – said he had opportunities to be close to Somdet Phra Ariyawong-sakhatayan and serve him as a disciple and as such directly experienced his kindness and witnessed his commendable practices as a monk.

Even though he is a high-ranking senior monk, he is not prideful about his titles and often told others to treat him just like a simple old monk. During his free time, he usually walked around the temple to greet the visitors and teach the other minor monks,” Itthichai said.

“Despite his kind personality, when he teaches the minor monks, he is always very strict about monk rules and often teaches the monks in his control to behave calmly and carefully all the time. It can be seen that the monks at Ratchabophit Temple all have a respectful manner.”

Somdet Phra Ariyawongsakhata-yan was ordained at Wat Ratchabo-phit in 1948 and studied at the temple until he graduated from the sixth (intermediate) level of Pali studies before going to Banaras Hindu University in India to study a master’s degree in history. He graduated in 1969.

He then headed a Buddhism mission to Australia in 1973 and set up temples in many Australian cities such as Canberra, Melbourne, and Darwin. He was appointed abbot at Ratchabophit Temple in 2009.

People living around Ratchabophit Temple are obviously delighted that this is the third time since 1782 that an abbot from their temple was named Supreme Patriarch.

The government said today’s ordination will follow the same pattern of the last ceremony in 1989 at the Emerald Buddha Temple. The Supreme Patriarch will then return to Ratchabophit Temple.

Workers from the Bangkok Metropolitan Administration and the Emerald Buddha Temple have cleaned up the temple and the surrounding areas in preparation for the ceremony.