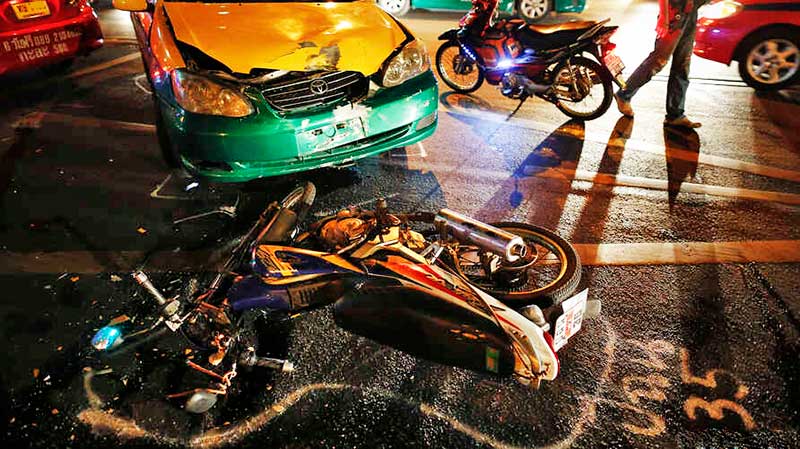 REUTERS FILE PHOTO for reference only

The year might be less than 8 weeks old but data released on Tuesday reveals the shocking amount of people who have been injured or killed on Thailand’s roads already in 2021.

According to Thailand’s Road Safety Collaboration, a non-departmental body aimed at improving road safety in the country, 2,047 people have been killed and 131,282 people injured on Thailand’s road since the turn of the year.

The stats include 64 fatalities on Monday, 5 of which were foreign nationals.

If the numbers of fatalities and injuries continue at the same rate, Thailand can expect in excess of 20,000 deaths and ONE MILLION injured on its roads by the end of the calendar year.

Thailand’s dangerous roads are of course no secret.

In 2015, a study by the World Health Organisation found that Thailand had the second highest number of road fatalities per capita in the world, second only to war-torn Libya.

And when it comes to motorcycle deaths per capita, Thailand ranks number one in the world.

In the same year, at a United Nations forum, the Thai government vowed to halve the number of fatalities by 2020, yet that a year passed the deadline and the authorities in Thailand are a long way short of their target.

As of this coming Friday, anyone applying for a new license or renewing an expired license will need to provide a medical certificate stating they do not have any underlying medical conditions that may impair their driving.

The medical certificate will need to be issued by a doctor and a statement from the driver confirming their fitness to drive must also be submitted.

Applicants will then be required to undergo tests for colour blindness, eyesight and reaction  time.

DLT director general Chirute Visalachitra said that as a driver’s physical fitness deteriorates with age the ministry needs to ensure the applicants’ driver ability is not affected.

A medical certificate will also need to be presented for anyone purchasing a new vehicle, the DLT said.