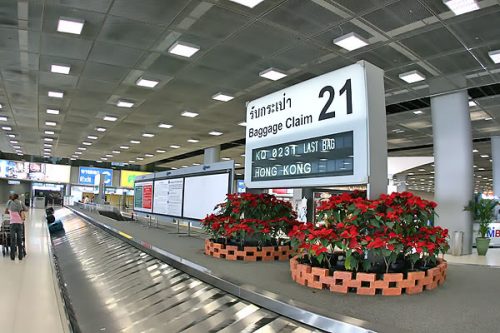 Suvarnabhumi International Airport is investigating the claims by passengers that airport staff went through their bags without permission in late February.

The airport is looking into the claim following a widely shared warning on social media, which stated passengers  who traveled on Feb. 25 on flight MM0990, had their suitcases’ locks destroyed and their bags raided.

The flight, which flew from Bangkok to Okinawa, Japan was operated by Peach, a low-cost airline based in Japan.

The airport issued an apology and claimed that each airline is responsible for their own baggage handling. In this case, Peach outsourced the job to Bangkok Flight Service company.

Suvarnabhumi is working with the airline and Bangkok Flight Service to find the perpetrators.

The statement added that the airport’s operations are monitored with CCTV, and security guards and police patrol the baggage handling area regularly.

For incidents like this, the airport recommends that passengers inform the airline and file a report with Suvarnabhumi Police on the first floor, near Gate 3.