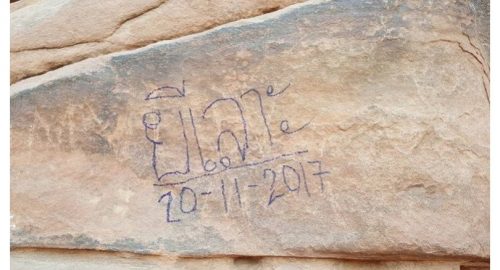 An executive of a Pattani school has apologised over a recent incident in which more than one school graduate reportedly wrote on ancient stones at a World Heritage Site in Jordan.

Executive Abdulloh Yeeloh from Salihiyah School in Khok Pho district, who is currently visiting Jordan, was asked about the incident on Thursday during a phone call from a committee of the Southern Border Islamic Private Schools Executives Association.

Association president Nasrudin Lehnu said Abdulloh admitted to visiting the ancient site along with many students now studying in Jordan. Abdulloh claimed that he was unaware of the vandalism of the ancient stones at Umm al-Rasas until someone posted about it on Facebook.

Nasrudin said that Abdulloh told him that some students later admitted to have written on the stone without knowing that it was not allowed, as they claimed the spot had multiple etchings in various languages.

Nasrudin said Abdulloh would take the student to help remove the graffiti and said the group had apologised for the action that tarnished Thailand’s international image. Nasrudin said the school’s Facebook page had received many critical comments and so had been temporarily closed.

“The writings were done only a day before my visit and Jordanian officials have urged those who did this to remove the writings or they would expose the school and the country so tourists from all countries would know that Thailand doesn’t take care of its own citizens’ quality, the scholar posted.

The ancient stones at Umm al-Rasas in present-day Jordan was declared a United Nations World Heritage Site in 2004.