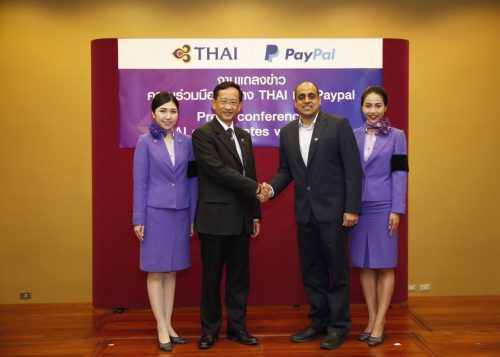 Foreigners wishing to visit Thailand can now purchase tickets online at www.thaiairways.com with the added convenience and security of PayPal.

As part of the deal, travellers booking their Thai Airways tickets via PayPal will be credited with 1,500 miles directly into their Royal Orchid Plus account.

To be eligible, participants must be among the first 1,000 travellers to book their trip on THAI’s international routes. They also need to be a member of THAI’s Royal Orchid programme.

For Thailand’s travel industry, according to PayPal, the opportunity lies in better serving the needs of the growing group of “connected travellers”, who expect a smooth online journey from the planning to the final booking of the trip. This is especially important for Thailand, a major tourist destination that has seen a steady increase in numbers since 1997 and which recorded an all-time high of over 30 million visitors in 2016.

“The travel industry is rapidly changing, with more tourists looking to make their travel arrangements online, either through their laptops or their phones and tablets,” said Teerapol Chotichanapibal, THAI executive vice president.

He said this was apparent through the integration of PayPal as a payment solution on THAI’s online platform, with the airline seeing increases in transaction volume from travellers from Germany (19 per cent), Italy (10 per cent) and the United States (5 per cent).

Rahul Shinghal, PayPal general manager for Southeast Asia, added: “Thailand is well known for its vibrant tourism industry. However, as travellers evolve, so must businesses.

“Today’s digital traveller is demanding simplicity, convenience and trust when making travel bookings, and mobile is the way to go. If businesses can offer a simple and secure payment experience that allows travellers to make online bookings seamlessly anywhere they want, they are set for takeoff.