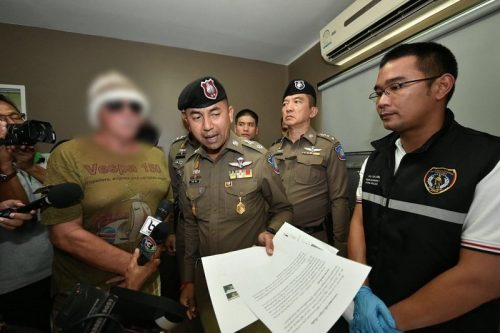 A Swiss man who has been living in Thailand for twenty years has been arrested by Thai police on charges related to the possession of child pornography.

Acting on a tip off from police in the US, Thai police raided a house in Pathum Thani on Thursday and arrested Swiss national, Christian Python (name transliterated), 64.

A computer seized during the raid was found contain large amount of pornographic images of children aged between 4 and 18 years old and 248 video clips.

Pol Maj-Gen Surachet Hakphan from the Tourist Police said the man had been living in Thailand for twenty years but was known to authorities in the US who said he was operating one of the top 10 largest child pornography websites in the world.

According to Pol Maj-Gen Surachet the suspect is unemployed and admitted the content was his and that he liked watching child pornography.

However, he denied distributing any of the indecent material. Specialist forensic officers are now checking the suspect’s computer to confirm if this is true.

If he is found to have distributed the material he could face additional charges, Pol Maj-Gen Surachet said.

The suspect has been charged with possession of child pornography for which he faces up to 5 years in jail.

Pol Maj-Gen Surachet said that they had shutdown 700 illegal pornographic websites and are closing in on some of the people who operate them.

The arrest comes amid continued efforts by law enforcement to arrest foreign pedophiles in Thailand.