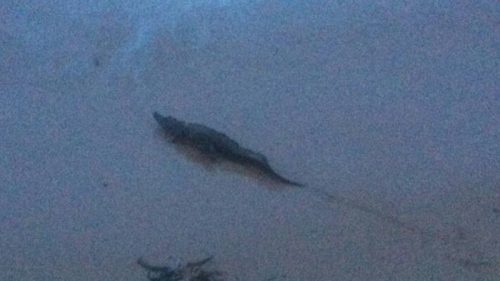 The croc was seen on Kata Noi Beach by staff from the Katathani Hotel. Photo: Eakkapop Thontub

The search for crocodile previously seen swimming off Yanui and Nai harn beaches moved to Kata Noi Beach today after staff from a nearby hotel saw the aquatic reptile crawling on the beach.

The group was later joined by Phuket Governor Norraphat Plodthong.

At 5:30am today (July 21), Mayor Thawee was notified by staff from the Katathani Hotel that security guards had seen the crocodile swim up to and walk up Kata Noi Beach.

Following the sighting security guards stayed monitoring the beach and advised beachgoers not to enter the water.

Mayor Thawee said that officials and beach operators have since closed the beach until the crocodile has been captured and that officers have been posted to keep an eye out for any other crocodiles in the area.

All staff working at beachfront businesses at both Kata and Karon have also been asked to keep an eye out and warn tourists to be careful.