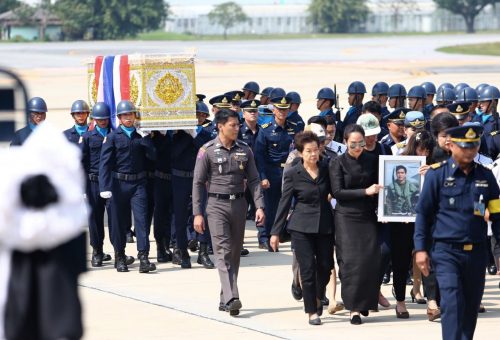 The pilot killed in a crash during an air show in Songkhla on Natioal Children’s Day is to be promoted posthumously.

Squadron Leader Dilokrit Pattawi, 34, would be promoted to the rank of air marshal and would be eligible for a royal decoration, Air Force Commander-in-Chief ACM Jom Rungsawang said. The pilot’s family would also be entitled to a monthly allowance for a military officer killed during an official operation.

Dilokrit, from Wing 7 based in nearby Surat Thani province, was performing at Wing 56 near Hat Yai on Saturday when his JAS-39 Gripen fighter jet crashed as shocked spectators, many of them children, looked on.

Jom presided over military honours to receive Dilokrit’s body at 1pm yesterday at the Don Mueang military airport in Bangkok. The body had been transported from Hat Yai on a C-130 transport plane.

Earlier Dilokrit’s father, ACM Arom Pattawi, who was dressed in full air force uniform, claimed his body from a Songkhla hospital to send his son’s remains for funeral services in Bangkok. Prayers will be held at Wat Phra Srimahathat from today until Sunday and a royally sponsored cremation will be held on the following Monday.

Jom expressed condolences to the father and said he had instructed a special Air Force committee to investigate the cause of the accident.

The Air Force chief said he could not speculate on the cause of the accident but he was confident that the Swedish-built Gripen was a fighter plane with high capabilities and Dilokrit was a skilled pilot with a lot of flying hours and experience. In addition, he was not performing aerobatic manoeuvres when the accident happened, but was flying as in a normal exercise.

Despite criticism following the tragedy, Jom said the Air Force would not halt its air shows in future.

He said the Air Force had made the right decision to acquire Gripen planes, which were not expensive when their capabilities were taken into account.