Planes Fly In To Create Artificial Rain In Koh Samui 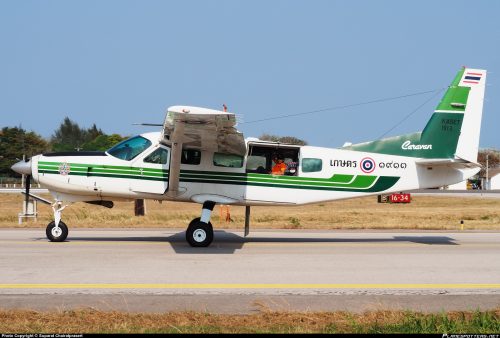 Plane ready to “seed” the clouds in Koh Samui.

Two planes from the “Surat Thani Royal Rain-Making Operation Centre” were flown over to Koh Samui to SEED the clouds on Monday.

Meanwhile, water trucks were sent out by the district’s waterworks authority to distribute water to the residents as tap water has become scarce.

The waterworks authority in Koh Samui normally produces enough to meet about 40% of the demand of residents on the island while the rest of the required water is met by the desalination plants from the sea.

Buriram Province has been blessed this season with just about the right amount of rain that is required for the rice crop, which should result in a good harvest next month.

The North East (Isaan) region of Thailand is the bread basket of Thailand with regard to the production of rice which is the staple diet of Thailand and most of the Far East.

Other regions have not fared so well, in fact some central areas of the country are preparing for floods over the next few days.

The rainy season normally starts about this time in Koh Samui anyway, so let’s see what happens!