PM To Stamp Out “Position Buying” In The Police 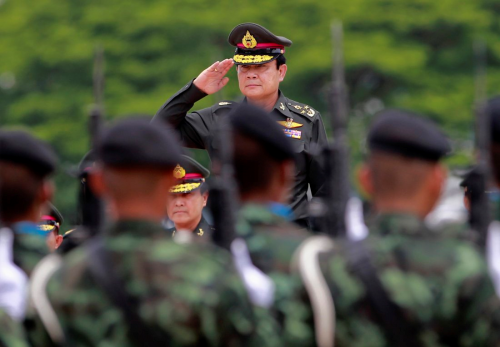 PM to stop the buying of positions in the police.

The Prime Minister is set to exercise his special Section 44 powers under the interim charter to tackle the scourge of “position buying” in the police force. He admitted there have been many allegations of position buying in the force involving huge amounts of money and the government is preparing to tackle it by restructuring the Royal Thai Police reshuffle procedure .

In principle, supervisors at all levels, from the bottom at the provincial police commander rank to those holding middle and top posts, should have a say in appointments in their areas and the national police chief would make the final decision.

Under the current process, appointments of almost all commissioned officers are considered by the Police Commission chaired by the Deputy Prime Minister  but this is not working, the PM added after the joint meeting of the NCPO and the cabinet.

Currently, the deputy Prime minister has to consider more than 300 appointments and it is felt that this is too tiring. It is proposed that there should be a screening process for each level first . Discussions have been held about how to restore the confidence of the public in the police, particularly in appointments and transfers where there are always accusations of a lack of transparency and position buying.

Gen Prayut has asked Deputy Prime Minister Wissanu Krea-ngam, who oversees legal affairs, to draft an order under Section 44 of the interim charter to restructure the police reshuffle process.

Under the new process, supervisors at each level will be allowed to appoint and transfer officers under their jurisdictions, the same as in the military but the national police chief will have the final say.

The new system aims to prevent any intervention in the reshuffle process by the Police Commission. However, a spokesman has admitted the new system might not completely prevent corruption and malpractice because a major factor is still human behaviour, but it would be a major move to eradicate ill-intended activities in the system.

The cabinet meeting on Tuesday also raised concerns over corruption in other state agencies and ministries. The cabinet highlighted to officials that drafting and using the budget of each state agency must be transparent and accountable and it was stressed that any corrupt official would be prosecuted.