Police To Hand Over Many Duties To Outside Agencies 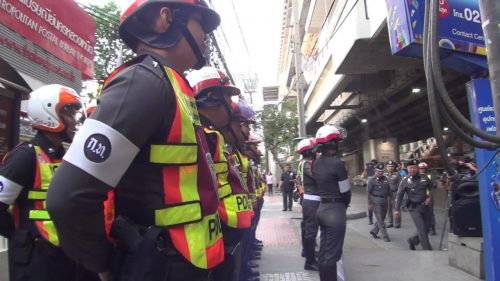 Police to hand over some duties to agencies.

The police force will transfer many of its current key missions to other agencies if the reform plan approved by the National Reform Committee on Judicial Affairs goes ahead.

The regulation of traffic flow and enforcement of traffic laws, for example, will be handed over to the Bangkok Metropolitan Administration (BMA), the Pattaya City Administration and some 30 other city municipalities within three years of the laws related to police reforms taking effect.

Following the reform, the Customs Department and the Excise Department will investigate alleged economic crimes under customs and excise laws themselves. These departments will also be able to seek arrest and search warrants from the courts on their own. 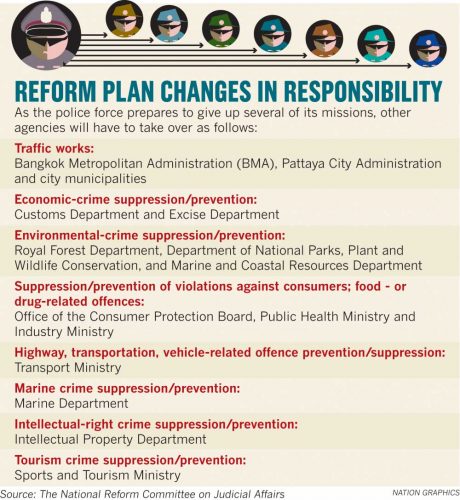 The Royal Forest Department, the Department of National Parks, Plant and Wildlife Conservation, and the Marine and Coastal Resources Department, meanwhile, will take over the investigation of environmental crimes.

The Office of the Consumer Protection Board, the Public Health Ministry and the Industry Ministry will have the power to investigate alleged violations of consumer rights and food and drug regulations, and make related arrests in the near future in line with the reform plan.

“The National Reform Committee on Judicial Affairs has already approved the plan,” the committee’s spokesman, Somkid Lertpaitoon, said yesterday. “We plan to get feedback from the agencies that will take over the missions by February 1.”

He added that the committee would have to review any feedback before submitting its final proposal on police reform to the government in March.

“The next step is then about the legislation of laws to allow the transfer of missions,” he said.

Somkid revealed that the plan would also seek to transfer responsibility for preventing and suppressing highway, transportation and vehicle-related offences to the Transport Ministry.

“The suppression and prevention of marine crimes will also become the duty of the Transport Ministry’s Marine Department, not the Marine Police,” he said.

Somkid said his committee also believed the suppression and prevention of violations against intellectual rights should go to the Intellectual Property Department.

“The duty to prevent tourism crimes should also change hands from the Tourist Police Division to the Sports and Tourism Ministry,” he said.

However, Somkid said his committee believed that police would still have to work with other agencies in various missions, such as boosting train-passenger safety and suppressing technology crimes.

“Regarding immigration, we need further discussions with the Office the Public Sector Development Commission,” he added.

This will hit the “income boosting” activities of the police very hard. It will be interesting to see if the agencies continue where the police left off !