Police Want Seat-Belts In Pickup Trucks And Their Beds 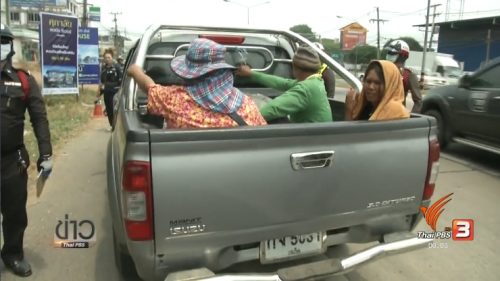 Until the new regulations are issued, police have no plan to arrest or fine pickup drivers or owners who carry passengers.

“We won’t take legal action against people who use their pickups for carrying passengers until the New Year,” Assistant National Police Commissioner said yesterday.

He said the National Police Office had written to the Land Transport Department (LTD)to propose measures for new regulations and would raise the issue at a meeting again today.

Earlier, various authorities pledged to take action against pickup drivers carrying passengers because laws currently state that pickup beds could transport cargo only. As a result, few people were seen in the back of pickups during the recent Songkran holidays.

“We believe we can be lenient and also help ensure people’s safety,” the Assistant Commissioner said.

Police have recommended installing safety belts in pickup cabs, and safety belts or railings in pickup beds. They also want pickups with passengers to drive at less than 80 kilometres an hour.

Songkran led to a media focus on road safety, given that millions of people travel to their home provinces or tourist destinations during the festival, which marks the traditional Thai New Year.

A total of 403 road accidents took place on Sunday, causing 44 deaths and injuring 427 people, according to the Road Safety Centre. Common causes were drunk driving and speeding.

Sunday was the sixth of the so-called “seven dangerous days” associated with the Songkran festival.

Nakhon Ratchasima had the highest road death toll at 17. Compared with the same period last year, the number of accidents during the first six of Songkran’s seven dangerous days was up by 284. The number of people injured increased by 235. But the number of deaths was down by 62.

Officials worked hard to promote road safety to prevent accidents, seizing 6,544 vehicles between Wednesday and Sunday after drivers were found to be drunk or had been drinking.

Yesterday was the last official holiday for Songkran, so many thousands of people headed back to Bangkok from the provinces.

Buses run by the Transport Co, a state enterprise, carried about 190,000 passengers in the morning.

Train stations also saw huge crowds of people boarding Bangkok-bound wagons. Many roads to the capital were also congested. The tailback on Paholyothin Road was so long officials had to allocate outbound lanes for inbound traffic.