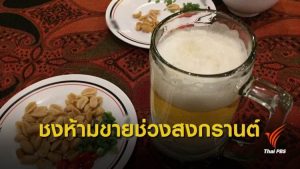 Anti-alcohol activists have been buoyed by a poll and still hope to persuade the government to ban drinking on April 13th.

This day is one of the main days of the traditional Thai New Year when cultural events are held.

Thai PBS reported that 70.1% of respondents in a poll thought that banning alcohol on this day would help protect the beautiful Thai culture.

Those who opposed the idea said it would make Songkran less “sanuk” (fun).

Dr Udomsak Sae-ngow of the Center for Alcohol Studies is presenting the poll findings to a ministerial committee in an effort to get the ban approved for this year. They are set to decide on March 15th, Friday.

The poll also showed widespread approval for restricting hours to sell alcohol. Some 50% wanted booze not to be sold after 8 pm while 80% thought a 10 pm cutoff was reasonable.

Some 66.5% of non-drinkers thought that alcohol should be banned at events and concerts. Even 31% of drinkers agreed.

It was not immediately clear if the poll referred to just April 13th or other days of the year.

Theera Watcharapranee of another anti-alcohol group was not sure if the ban would come in this year and suggested it may be modified and become law for next year’s Songkran.