Poll Results Show That Thais Believe Corruption Should Be Punished 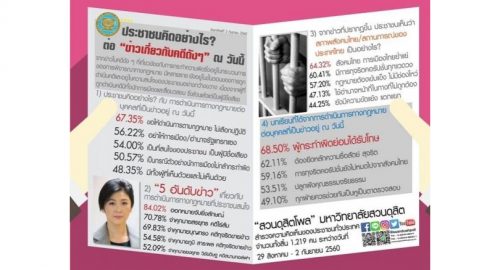 Most people have been paying attention to the recent legal prosecutions against allegedly corrupt people and want justice to be done without political bias, a Suan Dusit Poll released on Sunday has found.

Of 1,219 people nationwide, 67 per cent thought that prosecution for corruption must be applied equally to everyone, and 56 per cent said that politicians and state powers should not interfere in the justice process.

The poll, entitled “What do people think about recent prominent cases”, was conducted from August 29 to September 2.

The issue of an arrest warrant against fugitive former PM Yingluck Shinawatra particularly caught the attention of most of those surveyed, at 84 per cent.

Almost 71 per cent were aware of the imprisonment of TV personality Sorayuth Suthassanachinda, almost 70 per cent had followed the 42-year jail sentence for ex-commerce minister Boongsong Teriyapirom and more than 54 per cent had paid attention to the 36-year imprisonment of Boonsong’s ex-deputy, Poom Sarapol.

Poom and Boonsong were sentenced on August 25 for faking a government-to-government rice deal as part of Yingluck’s rice-pledging scheme.