Prawit Orders Review Of Speeds On Intercity And Rural Roads 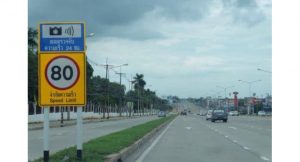 Prawit orders review of speeds on intercity and rural roads

Prawit, who is in charge of police affairs, ordered a study and review of vehicle speed limits to bring them in line with changes in vehicles and road conditions, but to continue prioritising overall road safety.

He also told the Royal Thai Police to coordinate with Interior and Transport ministries to review and update ministerial regulations issued under the Land Transport Act BE 2522 (1979) and the Highway Act BE 2535 (1992), Ministry of Defence Spokesman, Lt-General Kongcheep Tantrawanich, said on Wednesday.

Prawit told the bodies to consider using CCTV and electronic traffic sign technologies to help control vehicle speeds. The technology could allow for permitting changes in speed limits at different times of the day and under various traffic conditions in order to reduce crashes, facilitate people’s travel and promote the transparency of traffic police.

According to the third, sixth and 10th ministerial regulations issued as per the two acts, the legal speeds are as follows.