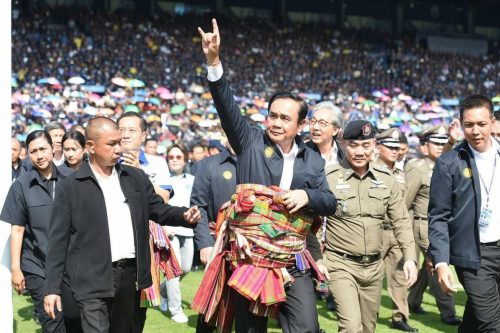 Prayut acknowledges the crowd in Buriram.

JUNTA LEADER General Prayut Chan-o-cha faces fresh criticism for attempting to woo old-guard politicians to support a pro-military party, during his latest trip to the Northeast that began yesterday.

In Buri Ram, where he took to the stage cheered by a crowd of around 30,000 locals, Prayut may be hoping that his Bt20-billion development budget will win him the support of local political heavyweights, paving the way to election success.

Local power the Bhum Jai Thai Party came third in the last election, in 2011, when it gained 34 parliamentary seats.

While securing Bhum Jai Thai’s support would help guarantee the junta’s role in the post-election administration, it would still leave the military bloc a long way short of the 200 seats it needs to surpass the Pheu Thai Party, which at the last polls gained 265 seats, accounting for 53 per cent of all seats.

Four years ago this month, Prayut staged a coup and blamed politicians as the root cause behind half of the country’s problems.

But today, all signs point to Prayut building an alliance made up of those same politicians he pledged to eradicate from power after the coup.

After endless politician-bashing, “now Prayut and the junta are using many of these same corrupt politicians to build a political party”.

The comment came as Prayut set out on his visit to Buri Ram, where he was welcomed by local political “kingmaker” Newin Chidchob.

Newin, who played significant roles in the premierships of Thaksin Shinawatra and Abhisit Vejjajiva, vowed to distance himself from political activities in 2011 but is still regarded as an influential local figure.

Bhum Jai Thai’s current leader, Anutin Charnvirakul, also made an appearance on stage yesterday, and claimed that the mass local gathering had no political agenda. “It’s still too soon to think about the election now. We don’t know yet how many MPs we’ll have,” Anutin said.

Prayut had just three weeks ago appointed political figures influential in the eastern seaboard to Cabinet-level adviser positions – a move that caused many to wonder whether the general’s impression of politicians had already been changed under pressure to attract credibility for his own future political ambitions.

In recent months, Prayut has reportedly also met with Sasomsub family, another powerful political clan based in Nakhon Pathom.

“Prayut understands how politics functions. If you want to win an election as a newcomer you have to collaborate with existing powers in provinces,” said politics professor Titipol Phakdeewanich.

Yesterday marked the start of Prayut’s two-day visit in the lower northeastern provinces of Surin and Buri Ram before he heads a mobile Cabinet meeting today.

Praising Buri Ram as “culturally rich province with peace and no political conflict” and “a good model of people unity”, Prayut yesterday promised the mass gathering he would fix the problems for a province that suffers low income per capita.

In Surin, where Prayut visited a local silk village, he was greeted by 3,000 people.

Provincial authorities, meanwhile, are expected to ask the Cabinet to grant over 84 rai (13 hectares) under the Department of Highways to build a new customs checkpoint.